At first glance, it would seem that Wikileaks is revealing secret documents that have the potential to damage the credibility of almost every country on the planet and provide an insight into what really goes on in politics.

However, there are a growing number of people who are questioning the motives of Wikileaks and the source of the information it receives.

Gordon Duff has written an article offering his views, suggesting that AIPAC and Israel may have some involvement in all of this. Whether this will be proven remains to be seen. 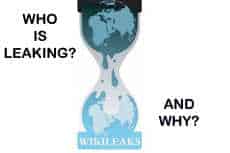 Regardless of who might be supplying the information to Wikileaks, there are a few things that I find puzzling about all of this. It seems strange that the government have been able to keep details of the JFK assassination secret for nearly 50 years, and have withheld vital information related to 9/11, yet appear helpless to cover-up or stop an individual from releasing sensitive (and secret) material over the internet.

Most of the people writing articles that criticise governments or certain countries have been the target of censorship at some time or another (I have), and have seen a certain search engine bury these stories in places where they will never be seen. If all this is possible (and it is), how can a site like Wikileaks manage to escape untouched?

Sure, the Wikileaks site is experiencing some technical difficulties, but is this an attempt to gag them, or to make it look as if someone is trying to?

Usually, when the government wants to hide a certain news item, they simply call the mainstream media and ask them to keep it off the pages and not to mention it on their TV channels. The mainstream media are normally happy to oblige, but on this occasion they are reporting the leaks.

Has the US government forgotten to ask the media for help on this, or do the mainstream media answer to different masters?

The information leaked seems to be real enough, but where is it coming from and who benefits the most from the damage it may cause?