Where was Joshua Rubin heading to when he left his apartment on Lawrence Avenue (Brooklyn NY) at 9 PM on Halloween night? Why would he leave behind his dream, his very own coffee shop and bakery (Whisk Bakery Cafe), which just opened for business a month and a half ago before he vanishes (September 16th)? Did Joshua meet with foul play? Did he leave the New York area? Was he depressed for some unknown reasons?

Joshua was suppose to go to a Halloween party, I’ve heard, the night he went missing. He never shows up to this undisclosed Halloween party. He’s said to have been wearing jeans and a light-colored sweatshirt, but that’s not much to go on. By watching the Vimeo promotional video (which I’ll link for you) for his life-dream project, the Whisk Bakery Cafe, you get a better sense of what he looks like, than you do from NYPD missing person’s poster. 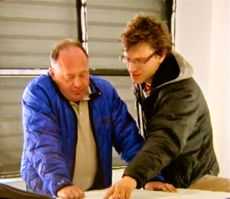 For one thing, his brown hair is much longer in the Whisk video and you get some insight into his personality and character, as a young man who is genuinely inspired, enthusiastic about the possibilities of his new business, which looks much more free-form and imaginative than your standard Starbucks, which are generic to a fault. I mean, Joshua was going to periodically feature poetry readings, jazz bands, and original art in his very own cafe.

Several friends and even his realtor give stirring testimonials on the promo video that are convincing endorsements for the authenticity of Joshua Rubin’s ability to make his coffee shop work. He got his chops down at the Coffee Exchange (Providence Rhode Island); The video shows the interior of the Coffee Exchange, as well as an artist’s rendition of the front.

Joshua has rather a more intellectual demeanor, from what I can tell. I haven’t heard where he went to college (Was it Yale?), or what his major was, but I suspect he favored the liberal arts. Behind him in the video, you see a great many books, but can detect the author of only one volume, Franz Kafka. Kafka’s short story Metamorphosis was one of my favorites when I was younger man. Joshua’s apparent cerebral tendencies may be a clue in his disappearance? *(Is he narcissistic, for example?)

Family, friends, and professionals are searching for Josh Rubin in the best ways they can think of. Brooklyn, Queens, and Manhattan have all been probed carefully. He may very well have left the New York area on his own accord, but New York is a sizable amount of ground to cover, and very densely populated too. Josh would need money to survive on the street, but no reports have emerged as to any bank activity or possibly, money taken from the Whisk Cafe.

We know very little, other than one day a young man seems to be living out his dreams, (and in a way that blows most of us out of the water) then the next day he vanishes without a trace. Most of us don’t have the courage, gumption, or vision to start our own business and make a go of it, yea, make it successful. Josh was doing it!

Speculation focuses on the notion that the task at hand was putting a great deal of pressure on Josh, and this is why he walked away from it all on October 31st. We know so little, but let’s try and find Joshua Rubin anyway.