NewsBlaze News
Home Thoughts Opinions What Does a Photo of a Burned-Out SUV in a Lonely AZ...

A shocking photograph of a burned out SUV in an Arizona desert , with the attractively tall carneglea gigantea cactus dotting the landscape, caught my attention. I thought, well, just another story about the drug trafficking and gratuitous violence of the Mexican cartels. The photograph seems to tell us everything, and yet, when reading comments that Pinal County Sheriff Paul Babeu has made to various news organizations, I sensed something very different lingering just under the surface. 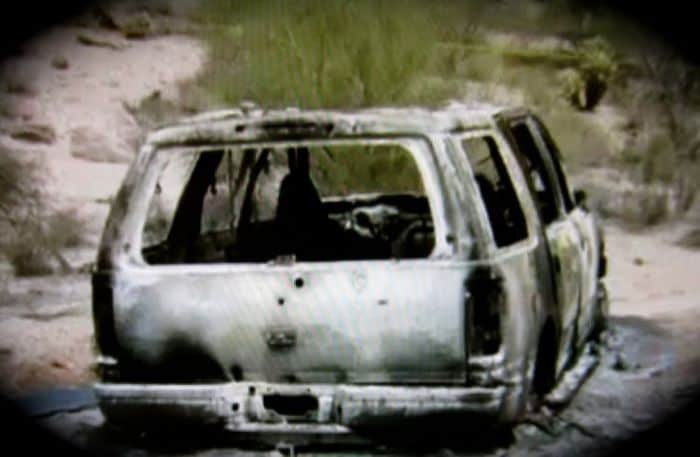 I began to research as many reliable news articles as I could find on this abandoned, burned out sports utility vehicle, that (from pictures) sticks out like a sore thumb, and was discovered by the Border Patrol (still smoldering) at 8:30 AM on Saturday, out in nowhere, off Interstate 8 in the Vekol Valley area of Arizona. Oddly enough, this was one and the same Ford Expedition that the Border Patrol had lost earlier, at 4:30 in the morning when chasing it, suspicious (as they were) of some type of illegal activity.

One part of the account of the car chase was most startling to me; when the Expedition exited Interstate 10, it was airborne before landing on desert sand and proceeding into oblivion for several more miles. One charred body was in the backseat and four more incinerated bodies were crammed in the storage or trunk area of the station wagon.

Was the car a stolen one? What type of accelerant was used to burn the car and to burn the people? Was there one perpetrator or more than one? Were the unknown victims (neither identified by gender nor by ethnicity) killed before being taken out in the desert, or killed once they got there? Is it drug related? We hear the Border Patrol found some evidence of this out there, but we don’t know what they found.

This is all very scary! Initially, our ho hum impression of just another Mexican drug cartel massacre, takes on a different timbre, when we realize the roasted SUV was found so deep within the States. The dry and scruffy looking Vekol Valley desert is actually a full 70 miles north of the border and yet only 35 miles south of Phoenix, Az. Why are these people freely operating so far into the U.S., we are asking ourselves? And why has the ruthless violence we see so often in Juarez spilling over here?

We still don’t know quite what happened here, who the victims are, or what they did so wrong to get themselves murdered. Once again, the photograph tells us everything we need to know, without answering more particular questions regarding the identities of the persons involved or where they may gotten this car. One observation of mine, is that the driver of this Expedition, who skillfully evades tailing Border Patrol vehicles, was a professional getaway driver who knew what he was doing.

Not to get unnecessarily bent out of shape about this one incident, since this Vekol Valley area is well-known as a drug smuggling corridor. Furthermore, the Pinal County deputies got themselves involved in better than 350 of these high-speed chases just last year. This is just another one, or is it? What if it turns out that some of the victims lived on the American side? It would give this case some distinguishing characteristics.