NewsBlaze News
Home Thoughts Opinions The Ultimate Trump Debate, Is it a Wig?

As a liberal leaning British man who works closely with many US entrepreneurs and companies, last year’s presidential race put me in a rather odd position. I can’t really describe how much contempt I have for the racist, sexist, Cheetos-colored waxwork currently in the White House. And because I didn’t want to upset my clients and didn’t know where they stood politically … I didn’t say a word.

Of course, I had my own political perplexities to deal with as well. Not long before the election to end all elections (and hope) I had watched my country depart the EU in a move I can only describe with a series of baffled grunts and a strong desire to emigrate to Greece.

I found that the best way to deal with all of this was not to debate it or to get angry about it, but just to take my mind off it. When everyone was debating Trump’s stance on the environment, I was calmly wondering who styles his hair, or even if his hair is actually his. And that led me down a rabbit hole that I’m only just emerging from.

I mean, it looks like a wig … it has to be a wig, right? But if so, then why does one of the richest men in the world-someone who can buy and sell small countries, huge corporations and the dreams of countless young Americans over and over – choose to to buy a wig like that?

You don’t expect Richard Branson to show up to work in a £20 suit from Primark. You don’t expect Victoria Beckham to suddenly declare her love for Debenhams, so why would a billionaire businessman buy a wig like that? And if he didn’t, then the only conclusion is that it’s not a wig, which is an even more bizarre proposition.

According to a former stylist of Mr Trump, who gave an interview to the Mirror Online, what looks like a wig is actually a very meticulous comb-over. “He has really long hair and he combs it back straight” she told the tabloid, presumably as they quizzed her on his bedroom habits and begged her for a kiss-and-tell.

She even went as far as to suggest that it is cut by one of his family members or even by himself, which would certainly explain a few things. On a slightly (infinitely) more reputable newspaper, it has been suggested that Trump uses a hair growth medication that works much like saw palmetto.

But it still doesn’t quite explain everything. Or at least, that’s what I thought until I saw his mother. The picture in question is a screen grab of an interview that his mother conducted back in the late 90s, when Trump was just your average sexist billionaire and had yet to evolve into the pussy-grabbing POTUS we know today.

It took me a few moments to decide if I was actually looking at The Donald’s mother and not just a picture of the man himself during his morning ablutions.

But then, everything fell into place and the puzzle was complete. 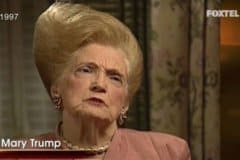