It seems the naysayers got it wrong again. Just when everyone was geared up for businesses to collapse under the weight of overwhelming healthcare costs, the truth finally comes out.

Companies will actually save huge amounts of money per employee. And they have to thank, not Republicans, but Democrats for this happy situation.

Unfortunately, employees and taxpayers won’t fare so well, thanks again to those inept legislators who ramrodded the legislation through congress without bothering to read it all. 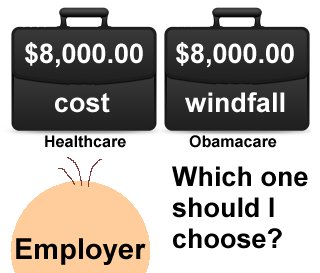 It seems that employers, struggling under $8000+ payments per employee family, can decide to completely drop healthcare and be fined $2000, thus saving them $6000 per employee. For a company with up to 40 employees, the exempt level, they will save $8000 each. Larger companies save $8000 for the first 40 employees and $6000 for each additional employee – because of the $2000 penalty.

There is gold hidden in legislation and magic in numbers!

Companies have options, thanks to the law. They can triple the amount they are paying for health costs, or they can slash costs to almost zero. What a deal!

Employees, will have the option, not of staying with their existing insurance, as promised by the feckless legislators, but of picking up the tab themselves, using the government exchange, or if they don’t earn enough, turning to medicare.

The legislators love the words “penalty.” It isn’t obvious whether they love the sound of the word or if they are just giddy with the power they get from it. H.R. 3200 uses the words “penalty” or “penalties,” 312 times, by my count.

Eventually, the congress will catch up, and if Democrats are still in charge by the time they do, the penalties could increase to such a point that it is no longer profitable to not provide healthcare. By that time, prices will probably have risen, the grandfathering will have been lost and everyone will be in the government-controlled exchange. Except the legislators and president, of course – they will have their own insurance plan.

Congratulations, Harry Reid and Speaker Pelosi, you’ve done a fine job. It is a pity you didn’t bother to read and digest the legislation you forced through. And you wonder why the people form Tea Party movements and don’t like you!

Obama care, the legislation that keeps surprising us, and providing fodder for stories, month after month!

Note: I tried to read the legislation myself, while investigating this story, but was unable to understand exactly how it works. As stated above, I was surprised to see the number of times “penalty” was used in this legislation supposedly in “the land of the free” and wondered if King George was again in charge. I therefore used the information found in a story by Karl Rove, in the Wall Street Journal

The Bad News about Obama Care Keeps Piling Up. So it is perhaps understandable that the lawmakers couldn’t read it either – but why would they pass it if they didn’t understand it?