The time for kissing babies and promising everyone something has passed.

The operative words this fall season following the election are “fiscal cliff.” Like it or not, the reality is it s coming at the end of the year, when tax cuts are set to expire and automatic spending cuts begin.

But that is small potatoes compared to the “entitlement cliff” looming over the country in coming years with a president unwilling to make the hard decisions that would greatly affect the very base of support that squeaked him back to a second term. 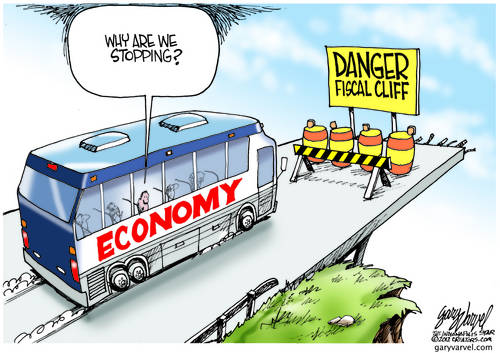 Entitlement spending is already so high that the cost of all entitlement programs plus interest on the debt is nearly equal to total federal revenue. That means virtually everything else the government does is being paid for with borrowed money.

Billions and billions of yearly payouts while the number of recipients in the government cart now (for the first time in our nation’s history) outnumbers those pulling it.

There is no question that many of these programs have grown alarmingly during President Obama’s years in office. Medicaid, for instance, has grown from 46.9 million recipients to 56 million, disability beneficiaries have increased from 7.5 million to 8.8 million, and the food stamp program has grown from 32 million beneficiaries to 47 million.

The other operative word? “Unsustainable”

More than 120 million Americans receive entitlements of some kind. An estimated 16 million new Medicaid beneficiaries resulting from Obamacare and some 18 million people who enter the health insurance exchanges will commence at the beginning of 2014.

That is just over one year to fix this fiscal crisis or face harsh realities of Greece, Spain, Portugal and other European countries floundering in a sea of red ink with no recovery in sight.

Can a politician who ran on bigger government actually solve these pressing problems, or simply make them worse by kicking the can into the next election?

The bottom line: For fiscal 2012, the federal government spent about $2.2 trillion of its $3.7 trillion budget on entitlement programs, while gross annual revenues stood at $2.6 trillion. Add interest on the federal debt of $220 billion to the entitlement payout, and that leaves less than $200 billion to pay for everything else, including defense, transportation, education, and homeland security.

The government makes up the shortfall by borrowing or printing money. It will only get worse.

Since 1980, Medicare and Medicaid have grown at more than 9 percent annually, and an estimated 77 million baby boomers are beginning to retire and collect Social Security. As this is happening year after year, the pool of workers who pay for these programs is not growing. Only 53 percent of households now pay both income and payroll taxes, according to the Policy Center.

By attempting to collect enough money to sustain this level of entitlement spending will only result in a reduction in work effort, reduced employment opportunities, and more people moving onto entitlements. The way to prevent this is to reform entitlements into real safety-net programs that help those most in need while not encouraging more relying on the welfare state.

A Financial Day of Reckoning

Simply put, unless the pool of people becomes the poorest and most genuinely needy Americans, the Day of Atonement is inevitable – a financial day of reckoning.

Is President Obama’s leadership up to the task or are we as Americans seeing the final fiscal decline of a once great nation?