At around 6.30 pm a street trader noticed smoke coming from a vehicle and detected the smell of gunpowder. He immediately informed a mounted police officer, who contacted the authorities.

Within minutes a specialist bomb squad, fire department and FBI were on the scene.

New York’s mayor, Michael Bloomberg, said “The device contained consumer grade fireworks which you can buy in Pennsylvania and drive into New York,” adding “It can best be described as looking amateurish,”

The car bomb has already been quoted as a “terrorist” act, but no particular group has been accused.

It would of course be no surprise if the authorities were to point a finger at “Al Qaeda,” but the simplicity of the bomb (a large and dangerous firework) would seem to rule that out. However, in saying that, some of the “bombs” discovered in Britain (attributed to Al Qaeda), were not much different, and perhaps even more simple in design. 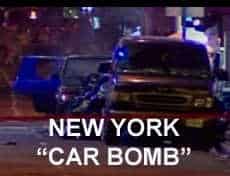 Maybe the location of the vehicle may give us some clue as to the culprit behind this act? Although it was parked in Times Square, which is a busy tourist area containing many theatres and members of the public, the Square also has the curved seven-story NASDAQ sign. Was it any coincidence that the vehicle was left outside a branch of the Bank of America?

We have seen a growing trend recently in the United States, of citizens using extreme methods to show their disgust at the way they have been treated (by banks, the IRS and the government).

The increased frustration experienced by members of the public, who have been unable to register their dissatisfaction through legal channels, has forced them to consider more drastic action.

If the politicians and authorities continue to ignore the real problems facing the public, we can expect to see incidents like this repeated many more times in the future.

CCTV footage will be examined to see if the culprit can be identified, but my guess is that we will discover a solitary individual connected to the vehicle, and if apprehended, will confess to “financial” reasons for his motive.