I still remember that hot Dallas day in August of 1965 when my family drove north on the Stemmons Freeway past the Texas School Book Depository Building. I was startled by its dark red, earthen tone. My family had only seen it on a black and white television in Houston, Texas during those dark days. “There it is, Dad,” I exclaimed with some trepidation in my voice. At that moment I felt equal measures of thrill and repulsion as I glared in awe at the ruddy colored building.

My enthusiasm for President Kennedy, his optimism, courage, and charisma all propelled me forward, and filled me with his hope, when I was very young. Yet the explanation for his death, by way of the Warren Report, left many unanswered questions. How could a lone assassin have committed such a sophisticated crime such as killing a president? What really happened in Dallas on November 22, 1963? Today marks the forty-fifth anniversary of the Kennedy Assassination, and yet many doubts still linger today. 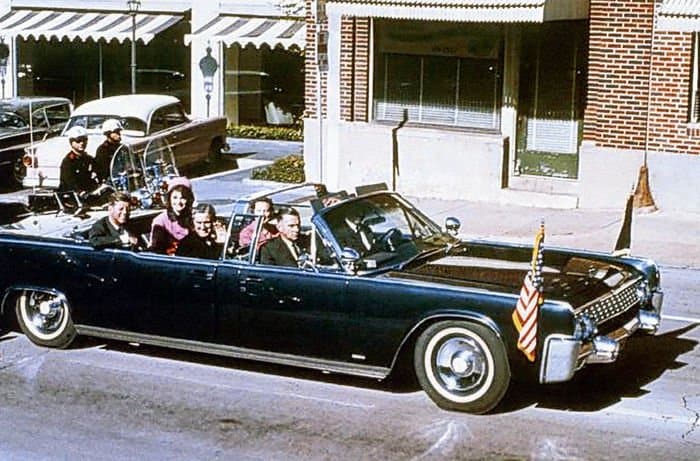 Throughout these forty-five years the American people have been bombarded with images, books, newspapers, magazines, films, and countless theories about the assassination, that have left them jaded beyond belief. Over the past few years a new cover-up has taken place, modeled after the same old withered, ‘single-bullet theory’ that has been clouding the light of truth from us all of these years. This is a mystery to me as to why this is still happening after so many intelligent, virtuous researchers have definitively countered the assertions of Oswald as ‘The Lone Nut.’ Just a few examples of the new cover-up would be a 2003 Peter Jennings production or the way in which The History Channel has pulled from rotation the superb seven part series The Men Who Killed Kennedy by Nigel Turner.

These specials have to leave out more than they leave in order to make this ‘lone assassin construction’ seem feasible. For me, it is still simple things that trouble me. It is little things that don’t fit. One example of this is, you will remember, that the Dallas police officer, Marion Baker, saw Oswald in the TSBD lunch room only 90 seconds after the shots stopped. The odd thing is, Marian Baker said that Oswald was calm, and not out of breath. This would mean that Lee Harvey would have to flee from the snipers perch, run through the myriad of stacked boxes to the other side of the building, hide the rifle, race down four flights of stairs, and then calmly enter the second floor coffee room, all in just a minute and a half! An impossible feat!

A litany of brave researchers have saved us from the permanent peril of obscurity in this important case. Therefore, I must sing praises here for the likes of Penn Jones, Jr., Gary Mack, Robert Groden, Harold Weisberg, Mark Lane, and most of all, Gary Shaw. Gary Shaw’s book Cover-up was my bible in the late 1970s. These brave individuals kept the spirit alive for dissent against the dark forces who didn’t want us to know who or why JFK was killed. Now days the internet protects us from these facts and clues from being lost to time. Moreover, information has been preserved by museums, libraries, and specialized archives. I have actually done a good job myself in preserving valuable records that shed light on this case. Last night I viewed a VHS tape, Fake, that has been buried in an archive box for more than ten years; I know of nowhere you can currently find this rare artifact.

And yet the truth about this case lies burrowed, aye, perched in a ‘snipers nest’ of data; the false facts must be carefully culled away from the uncut gems of truth that are hidden from view. The rubble of debris, the corpus of ephemera, that is, the artist palette for conspiratoricians must contain the best evidence, the reasons for this deed, how they actually pulled it off, and the manner of its blasphemous cover-up. The reality of what happened forty-five years ago today in Dallas is just as clear as spring mountain water, if we could drink from its fount, but we can’t taste of its sweet water today. Storm clouds shroud our view and a newly forged cover-up persists.