Republicans come in various shapes, sizes and types. There are conservatives and there are RINOs. The GOP wants to appeal to all, including libertarians, but RINOs are seen by many as part of America’s problem of a destroyed economy with massive debts hanging overhead.

With the next presidential looming, there are questions. Can a Republican seen as “too moderate” be tolerated by those in charge of the GOP? Can a RINO, melt the icy heart of the GOP kingmakers? Can Bush #3 be tolerated, even embraced.

At the last election, anti-Romney forces mobilized and delivered a win to what must surely be the worst possible choice for conservatives – Obama. This time, Mitt Romney and his financial and political backers are supporting the too-moderate RINO, Jeb Bush, according to a report in The Washington Post.

Jeb Bush, the former Florida Governor, is being encouraged to seek the 2016 Republican presidential nomination by a number of high profile conservatives worried about the power of the Tea Party and their “too conservative” candidates.

The theory is that Jeb Bush, who has not thrown his hat into the ring, can pick up the pieces of the beaten down New Jersey Governor Chris Christie. That alone could make him a viable alternative to a large portion of the Republican Party.

Mitt Romney had a great list of backers, but they were unable to overcome the anti-Romney conservatives, who, it seems, were prepared to cut of their noses to spite their face, and lay out the red carpet for four more years of Obama and the associated destruction that is all around us now.

Both major political parties have high-rolling backers. The GOP has Sheldon Adelson, the casino and trade show billionaire who backed Newt Gingrich. Adelson recently hosted a dinner in Las Vegas for high-rolling Republican campaign contributors. Tt was reported that the vast majority present were Romney’s biggest contributors in 2012. Now they are dedicated to a Bush nomination.

Jeb Bush is well known to party regulars and the GOP’s primary targets such as evangelical Christians. He is well known in Iowa, the first key primary of the presidential run for any candidate.

Jeb Bush also has a secret advantage. His wife, Columbia Bush, is Hispanic, and he speaks Spanish fluently. Democrats think they have the Hispanic vote all tied up, but they haven’t really done much for Hispanics. Republicans want more Hispanic voters and Jeb Bush may be the key to attracting those voters.

So far, this is all speculation. Jeb Bush has not announced his candidacy, and when asked, he has brushed aside any suggestion of his possible candidacy. He says he is traveling the country, speaking at fundraisers, and campaigning for other candidates.

In January, he was asked if he would run, and he said he might if he could do it “joyfully” because there was too much pessimism in America.

His book advocates immigration reform and common core education standards. He supports traditional GOP foreign policy agendas and opposes Medicaid expansion while being from the ‘elderly capital of the U.S.’

The former governor has been away from any elected office since 2006.

William Kristol, editor of the Weekly Standard thinks Jeb Bush has been away from politics for too long. He said “It’d be a little odd to nominate someone who was last in office in 2006, who hasn’t been politically involved at all, in any significant way, in the Obama years.”

It is possible that 2016 could see a case of “deja vu all over again,” Clinton v. Bush. 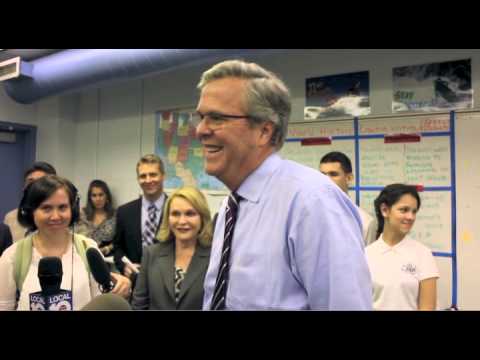