“Maybe this nigger should shut up and learn his place” is one of numerous racist hate-filled comments posted on YouTube attacking me, a black Conservative, for writing the “American Tea Party Anthem.” And who is spewing this racist hate? So-called tolerant Liberals.

But how can this be? According to the biased media, liberal democrats are saviors saintly protecting blacks from evil rich white conservative republicans. Regretfully, their “devoid of the truth” marketing plan has been extremely successful. For generations, like zombies, blacks award liberal democrats 90% of their vote.

Like the woman in the old diet infomercial, I want to scream to my fellow blacks, “STOP THE INSANITY! Liberal democrats are NOT OUR FRIENDS!” They want to keep us on their “you’re a victim” plantation. Simply put, Liberal democrats HATE ‘uppity’ blacks who achieve without their programs such as Affirmative Action.

Here are my outrageously stupid beliefs which have caused libs to call me the “N” word on numerous occasions. I love my country. I tell youths all limits are self-imposed. No one is entitled to the fruits of someone else’s labors. I refuse to see myself as a victim. 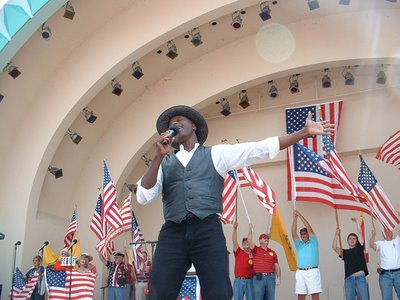 Liberal actress, Janeane Garofalo, diagnose blacks who think like me as suffering from “Stockholm Syndrome.” Garofalo in her arrogance is REALLY saying, “Get your black ‘A’ back on the plantation. Who do you think you are? You are NOT free. You are a eternal victim. Every white American will ALWAYS owe you! GOT IT, you dumb, ‘N’?”

And yet, with help from their local buddies in the media, Democrats successfully brand Conservative Republicans as racists. History reveals the truth that blatant racism has been the elephant in the liberal Democrat’s living room for years. (http://www.errvideo.com)

Examples are former Secretary of State Condolezza Rice and Supreme Court Justice Clarence Thomas. These two brilliant blacks should have been held up to black youths as shining examples of what can be achieved in America via character, education and hard work. Instead, Liberal Democrats despise Rice and Thomas. Rice and Thomas severely weaken the lie that America is racist with limited opportunity for minorities.

Also, the “victim business” can be extremely profitable. Remember when the NAACP got 54 million dollars from Dennys because some blacks received slow service? Give me a break! And then, there is the dirty little secret among liberal black democrats. Rice and Thomas broke an unspoken rule which goes as followed; to be true to one’s blackness, one MUST always harbor, at least a minimal, resentment against white America!

Here are more examples of liberal racism. A white blogger posted a doctored photo of black former Maryland Lt. Gov. Michael Steele in white minstrel blackface. The caption read, “Simple Sambo wants to move to the big house.” Liberal cartoonists published vicious racist cartoons of Condolezza Rice. They even called her “Aunt Jemima.” Former KKK member, Democrat Senator Byrd used the “N” word in an interview. Byrd apologized and everyone moved on. A few republicans who made far milder gaffs were verbally flogged within an inch of their lives and subjected to high tech lynchings.

The media ignores liberal democrat racism. I guess they consider it a kind of ‘tough love’ to reign in us blacks who have wondered off the victim plantation. When they call us the “N” word, it is only because they care. “Ouch, I’m movin’, easy with that whip!”

It is time for blacks to wake up and smell the betrayal. Democrat so-called compassionate policies and programs have destroyed many black families. Before Democrat President Lyndon Johnson’s “War on Poverty” in 1965, most black families were intact. Today, over 60% of black kids grow up without dads. Again, I refer you to (http://www.errvideo.com) The media and Democrats are co-conspirators in keeping as many blacks as possible crippled with a victim mindset and dependent on Democrats and government. Totally disgusting.

So, you libs and Dems, keep calling me the “N’ word. It only strengthens my resolve to keep standing up for the truth. In my best Charlton Heston as Mose impression, I command, “Liberal Democrats … LET MY PEOPLE GO!”