US Secretary of State John Kerry told a Senate Foreign Relations Committee hearing in April that Iran can produce fissile material for an atomic weapon in two months. He later corrected himself, suggesting 6-12 months.

In November 2011 the IAEA published a new report revealing an advanced Iranian design for a nuclear warhead developed with the help of former Soviet scientists. In response to the report, Iran threatened to close the Strait of Hormuz, a vital route for the oil trade that links the Gulf oil-producing states of Bahrain, Kuwait, Qatar, Saudi Arabia and the United Arab Emirates with the Indian Ocean. The US maintains a naval presence in the Gulf, primarily to ensure the oil routes remain open.

Meanwhile the current round of nuclear talks in Oman is running into trouble.

Wall Street Journal reported on 11 November that Global powers and Iran signalled they will extend their diplomacy beyond a Nov. 24 deadline if necessary, as three days of talks aimed at curbing Tehran’s nuclear program failed to win any major breakthroughs. The same Wall Street Journal reported recently that Obama wrote a Secret Letter to Iran’s Ayatollah Khamenei about Fighting Islamic State and urging progress on Nuclear Talks. This is not the first time Obama has written such letters.

According to David Frum, writing in the Sunday Times in June 2014, President Obama wrote in May 2009 to Iran’s supreme leader Ali Khamenei proposing nuclear talks and unfreezing of relations.

We must remember that Iran has a long history of deception and obfuscation. Last week it was revealed by the media that Iran could have five times more advanced centrifuges capable of producing weapons-grade uranium than it has previously admitted, according to the former deputy chief of the UN nuclear watchdog.

Olli Heinonen, who spent 27 years at the International Atomic Energy Agency, said Iran could have up to 5000 IR-2m centrifuges rather than the 1008 it has claimed. The IR-2m devices are up to five times more effective in enriching uranium than older IR-1 types.

Heinonen was speaking on the eve of nuclear negotiations between Iran’s Islamic regime and the P5+1 countries, which are the US, Britain, Russia, China, France and Germany.

Mr Heinonen said Tehran “could have up to 4000 to 5000 centrifuges or raw materials for them” located outside two of its largest nuclear sites, Natanz and Fordo.

Does the world trust Iran to honour its obligations? Would appeasing Iran work in easing tensions in the region? The belligerent and often conflicting statements coming out of Tehran are not reassuring.

Does Iran Have Something to Hide?

Experience shows that Iran doesn’t permit unimpeded access to International observers to all sites. According to opposition sources, over the past three years, the IAEA inspectors have frequently requested to visit a certain section of Parchin to study the unknown aspects of the regime’s nuclear weapons program, without success.

The Iranian regime’s Atomic Energy Organization spokesman, Behrouz Kamalvandi, stated that “legally, they have no right to visit Parchin since we are not implementing the Additional Protocol (to the NPT) and even if we did, access needs to be managed.”

In March 2014, President Rouhani insisted that Iran would not abandon its enrichment of uranium, after US senators called for it to be denied any such right under a long-term nuclear deal.

Supreme leader Ayatollah Ali Khamenei said on 9th April 2014 that Iran will never give up its nuclear programme. He said Iran had agreed to the talks to “break the hostile atmosphere” with the international community.

Most experts with special interests in Iran/US relations are of the opinion that any agreement with Iran that doesn’t give IEAE unfettered, and unlimited access to all sites will be a bad agreement. Does Obama really want to go down in history as the first American President who unwittingly enabled Iran to become a nuclear state with an arsenal of nuclear weapons?

Does Obama really want to go down in history as the first American President who unwittingly enabled Iran to become a nuclear state with an arsenal of nuclear weapons?

In April, President Rouhani said a deal by July was “very likely.” And there was optimism in Washington. The Iranian regime is playing for time.

The biggest stumbling block in the last round of negotiations was how much enriched uranium Iran would be allowed to continue producing.

Iran still insists it needs 19,000 centrifuges. Experts believe this number is unnecessary for usage other than nuclear weapons.

Even if Iran finally accepts a substantial reduction to below 5000, does the West really trust Iran? Does President Obama trust Iran?

John R. Bolton, former US Ambassador to the UN, said, “We cannot verify and must not trust Iran’s promises on nuclear weapons. Ignore the ‘moderate’ smokescreen. Sanctions have failed, so our choice is stark: use military force or let Tehran get the bomb.”

Iran’s state-run Fars news agency reported on May 3rd 2014 that on the eve of arrival of UN nuclear inspectors in Tehran, the Iranian regime’s Atomic Energy Organization intended to deny the international inspectors access to Parchin nuclear facility. The IAEA suspects that a decade ago Iran may have carried out explosives tests at Parchin that could be relevant to the development of a nuclear weapons capability. The IAEA wants to visit a specific location at the site, but Iran has not granted access so far.

The Arab States in the Gulf region are wary of Iran’s real intentions. In Saudi Arabia, the perception is that the Iranian nuclear programme is designed to threaten the Kingdom and its allies in the Gulf. 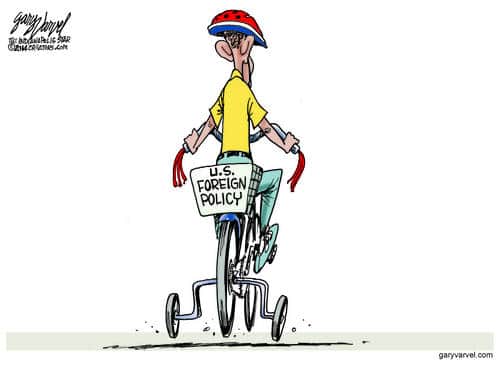 Why Is Obama Desperate to Reach A Deal with Iran?

Since last summer, the Obama administration has moved closer towards military cooperation with the Iranian regime, to prop up the Iraqi government and to fight Islamist rebels in Syria. In a bizarre paradox, U.S. foreign policy in Iraq has edged in the direction of alignment with Syria and Iran while those regimes remain Washington-designated sponsors of terror.

Separately, Secretary of State Kerry suggested military cooperation with Tehran was a very real possibility. As part of the campaign against ISIS in Iraq, “We need to go step-by-step and see what in fact might be a reality, but I would not rule out anything that would be constructive in providing real stability.”

Iraq’s turmoil is partly due to Obama’s hasty withdrawal, and his failure to confront the corrupt Iraqi Prime Minister Nouri al Maliki, largely responsible for many of Iraq’s woes.

Events since the withdrawal proved Obama wrong. Iraq has witnessed sectarian violence, suicide-bombs and explosions. Prime Minister Maliki was a disaster in the making, a corrupt bully who implemented divisive policies at the behest of Iran whose sectarianism backfired dramatically in June, when the Iraqi military disintegrated as ISIS jihadists attacked Mosul and other Iraqi cities.

The Iranians are fully aware of Obama’s desperation to engage in futile negotiations over its nuclear enrichment program. A year or so before becoming president, Obama indicated to the New York Times that he would seek co-operation with Iran as a way to extricate the US from the quagmire of Iraq, apparently oblivious to Iran’s subversive influence on Iraq, Syria and Lebanon.

Many experts are not fooled by Iran’s charm offense; everybody in the Middle East knows that Iran is seeking nuclear weapons. Rouhani can smile but his nuclear objective remains unchanged.