In India, the success of the United Progressive Alliance (UPA) as well as its largest constituent, the Indian National Congress in the 15th parliamentary general elections has once again proved that India, the largest democracy in the world, still follows the values of truth, peace, non violence, secularism and communal harmony of Mahatma Gandhi.

This is notwithstanding the ridiculous attempts of polarization of votes on communal grounds, by the main opposition, the Bharatiya Janata Party (BJP). Unnecessary projection of a notorious person like Narendra Modi as the Prime Minister for the 16th general elections and presentation of the Nehru-Gandhi family scion and newcomer politician Varun Gandhi as a firebrand Hindutva leader was part of this hateful campaign. In addition to this, the BJP left no stone unturned to project Dr. Manmohan Singh, a world famous economist, as a week Prime Minister. But the politically aware people of India rejected this propaganda of the BJP. 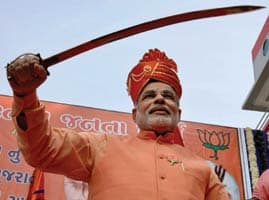 Indian people, especially the youth have, by endorsing their trust in the leadership of Congress President Sonia Gandhi and young leader Rahul Gandhi, have indicated that India fully rejects the politics of communalism, regionalism etc. And the youth of the nation wants to see India as a developed nation.

These elections results have also indicated that the voters are now bored with the regional parties. Besides, this possibility is also gaining strength that in future there can be the domination of the national parties and the Congress party once again can form the government on its own. Hats off to the people of India for voting in favour of youth leadership, secularism and development.