DO you remember the film “The Candidate,” where Robert Redford is the consummate talking-head politician? He is startled after winning a senate seat in California. He says to his staff, “What do I do now?”

His words were aimed directly at Russian President Vladimir claiming he was “surprised and disappointed” by a speech the former KGB official gave about his country’s “right” to take over Crimea from Ukraine.

Speaking to a group of university students at the State Department, Kerry said “It really just didn’t jibe with reality or with what’s happening on the ground. The president may have his version of history, but I believe that he and Russia, for what they have done, are on the wrong side of history.”

The secretary of state did not divulge what plans the United States is formulating should Russia continue their expansionism beyond annexing the Crimean peninsula. He did warn that such a provocative move would be as “egregious as any step that I can think of that could be taken by a country in today’s world, particularly by a country like Russia where so much is at stake.”

Kerry provided a way out for Putin’s blatant violation of international law that surprised the U.S.’s closest allies. He expressed his belief Putin would move beyond Crimea given Putin’s speech Tuesday.

Putin’s words included Russia’s “history with Ukraine.” Kerry acknowledged those ties but said they were no excuse for the invasion.

Hardly the tough words most Russian leaders have heard in the past. Kerry’s veiled warnings were capped off with a bizarre slap at all Russians.

A particularly barbed comment was made to USA Today, when Kerry said “I’m sorry that President Putin is living out and lamenting his loss of the Soviet Union and his desire to reconstitute the empire.”

That was mean, and is not likely to win him a medal for diplomacy.

No comment from Putin. He is probably studying this “insightful” quote in the Kremlin. You could even imagine sparks flying around there right now, and possibly the sound of laughter.

John Kerry also told USA Today, “You don’t win my being a bully.” Apparently he thinks you can win by belittling your opponent on national television and in youtube videos.

Such is the state of diplomacy these days. 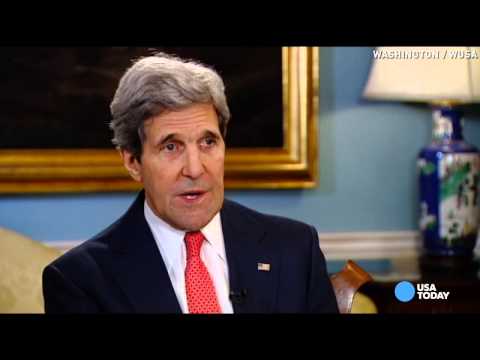