“I love to farm and shoot guys and wreck cars. I’m a redneck and proud of it, I like causing mayhem with my siblings.” Lee Grace Dougherty – Flickr.com

Right as the police officer cuts into the CVS parking lot you hear a volley of 7 shots (20 fired altogether) from an automatic firearm. At this time (7:02 AM, Aug 2nd) a Florida police officer has a flat tire.

Perseveres in the chase a bit more, then coasts to the shoulder of the road, out of action. Chase starts in Zephryshills, Florida, northeast of Tampa.

Next destination for the Dougherty Gang is Valdosta, Georgia. Look at a map of Florida. Valdosta just east of Interstate 75 when crossing over the border into the Peach State of Georgia.

Bonnie and Clyde and brother Buck Barrow hit the road. But where did they go over the past week? (Were sighted in Tennessee.) Had enough dough to lay low, but where?

And why are they driving the same car that everyone knows about? Mama, Barbara Bell no Ma Barker.

“Only mom knows what good people you are inside. Please prove me right and everybody wrong by doing the right thing now and turning yourselves in.” (WFTS 28 News in Tampa)

A text message from the desperadoes defies mama’s pleas to do the right thing. “THERE’S A TIME FOR ALL OF US TO DIE.” 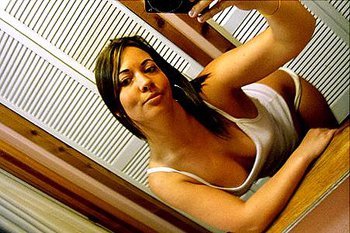 Long commute for Lee? Hit and run and DUI other notches on her belt of infamy. Flickr pix racy self portraits of the Bonnie Parker-like moll.

How will this play out? Not a movie, not romantic, but sensational nonetheless! REAL DEAL! Shocking headline news!

Punks on the lam, armed and dangerous! Contemplated their bunker made out of three cargo containers, wired with deadly electricity.

Arsenal underneath their home (where is their home?) No one dared to stop their plans. Why?

Watch (the YouTube cop car cam chase again) and wait for a firecracker ending (don’t want it, but afraid we’ll get it).

The Dougherty Gang Shoot Em Up