While I suspected all along (since November 19, 2010) that Andrea Sneiderman was behind the murder (if not the mastermind) of her husband Rusty Sneiderman, it wasn’t until yesterday, when they led Andrea away in handcuffs, that I absolutely knew she’d done it.

The indictment is online now (linked below on the USA Today), as well as some excellent, detailed news reports coming forth from the AJC; so give these documents due consideration.

I’m seeing some small cracks in the cement, which I’ll take possession of, and call my home for now. Clearly, the motive was greed. An informative timeline in the indictment tells us Northwestern Mutual Insurance paid the claim for Rusty’s life to Andrea on 12/14/2010, less than a month after Rusty was shot dead.

Two million dollars sure is a large sum, so why did Northwestern Mutual pay out so quickly? And under what circumstances did Rusty originally take out such a hefty sum of life insurance?

Was Andrea behind this also? And was she plotting all along to frame Hemy exclusively for her husband’s murder? I suspect this is true also. Why had she dropped to Shayna Citron that she thought Hemy Neuman was the one who killed her husband?

If she was going to lead a new life with Hemy, then why would she give him away? Andrea was actually eliminating this sucker, and she had used him to eliminate the other poor guy, who was worth two million dollars, if dead.

Boy, this is a cold guppy, if ever we’ve seen one. Even Barbara Stanwyck in Double Indemnity is a wallflower compared to this witch! After this sticky situation went down in Atlanta, I watched this movie several times over to see whether I could notice any parallels.

I certainly did! One obvious one is that relentless insurance adjuster Barton Keyes (Edward G. Robinson) would have to be Dekalb County District Attorney Robert James, who has built an excellent case in nabbing Ms. Sneiderman.

Well, I don’t guess Hemy Neuman is a very good fit with Walter Neff (Fred MacMurray), but we can insert him into the analogy anyway and most of it holds up. The main ingredient that ties them together (if you don’t want to play this shaky game), is GREED! 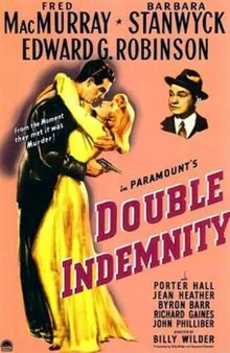 If that’s as far as you want to take it, it’s okay with me, since this is the central theme of this classic Billy Wilder movie, and it’s the theme of a real life news story, involving some very intelligent, yet very crazy people, who for some unknown reasons, went down the wrong path and crashed their lives!

I’m still studying this information just released, but I wonder how they got Rusty’s schedule that Andrea gave to Hemy so he could stalk him? Let’s see, there were two schedules he used to get at Rusty, one for Nov 10th and one for Nov 18th, the day he actually shot him. One wonders why the two of them didn’t burn these documents after it happened?

Or was it through emails they could see how they did it? And I can’t help but wonder how GE engineers could be so stupid as to leave a trail of incriminating electronic evidence behind them? Essentially a map telling us exactly how they did it!

And why did Andrea get on the witness stand last February? She put herself in the gas chamber, when tripping up about not knowing her husband had been shot when arriving at the hospital. And why did she call two people to say Rusty’s been shot, when Dunwoody Day Care never told her this? Not a very canny murderess.