Danny Pink warned Clara in the last episode- ‘The Caretaker’, that if the Doctor pushes Clara beyond what she is capable of she should let him know immediately. True to Doctor Who form this very scenario presents itself in an episode that is didactic and somber.

Missy and The Promised Land, are absent from this outing but Danny Pink gets a little sunlight near the end of the episode. Courtney and Clara are centre stage and vital to the episode. Clara tells The Doctor to apologize to Courtney Woods for saying she wasn’t special. It’s very motherly of Clara, being her teacher obviously understands what comments can do to the self-esteem of a child still growing. “Doctor it can affect her whole life,” says Clara appealing to The Doctor. Courtney Wood later on squares off with The Doctor saying, “Do you really think I’m not special? You can’t just take me away like that! It’s like you kicked a big hole in the side of my life. You really think it? I’m nothing, I’m not special?” The Doctor replies, “How do you like to be the first woman on the moon? Is that special enough for you?” and so begins the adventure. 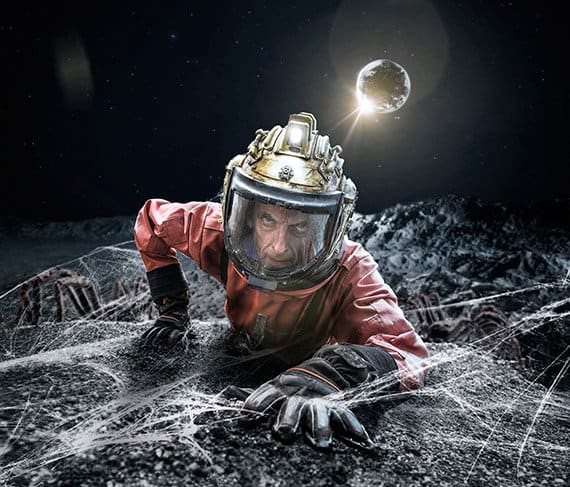 The spider-aliens that have inhabited the moon are the stuff of nightmares and the group have some casualties before they escape. Clara asks the Doctor to take Courtney out of the action because of it’s danger. This is something he doesn’t seem to be grasping, probably because he can regenerate. This was explored a little in ‘Listen episode 4’ where The Doctor’s travels get a little too dangerous and Clara has to call time on their adventure. The Doctor begrudgingly agrees saying that she should be teaching Courtney better than to live in fear because even ‘chips’ and ‘crossing the road’ is dangerous. Clara reminds him that she has a duty of care which is something he doesn’t understand as much as he says he does. This is ultimately explored in the third act of the episode where the stakes are dramatically risen to the highest peak imaginable.

The Doctor says that he has a theory, the seismic activity, the surface breaking up, the variable mass, the increase in gravity, the amniotic fluid discovered-the spiders are bacteria living on something very very large-the moon isn’t breaking apart, the moon is hatching, it’s an egg. The head of her now dead crew asks “How do you kill it?” and therein lies the heart of this episode-should they kill it?

Courtney’s earlier statement to the Doctor in the TARDIS before they embarked on their adventure suddenly becomes vividly relevant;

“Do you really think I’m not special? You can’t just take me away like that! It’s like you kicked a big hole in the side of my life. You really think it? I’m nothing, I’m not special?” The words could have easily come from the lips of the moon itself. At this point the Nuclear bombs become something akin to a metaphor of the pill as the realisation of what is being asked sinks in.

The Doctor is horrified but not at all surprised that the crew head would even think of that as an option, it’s not the first time The Doctor has had to step in to stop the annihilation of the last of a kind of alien or species. Doctor Who, Series 5, episode 2, ‘The Beast Below’ has a similar premise as its anchor. In that episode The Doctor was enraged at humans in this he is not so much enraged, he’s mildly disgusted.

At this stage of the story the metaphors are jumping off the screen. Womankind is represented in the forms of naive and hopeful child, Courtney, Youthful but mature Clara and the wise and weathered head of crew. So begins a back and forth for and against whether or not to do so, all the while a life is tucked away inside of the moon and billions of lives are present on earth. The decision will have ramifications that will determine and shape the formless future for better or for worse. I feel as though Peter Harness who wrote this episode was going for a dramatic commentary on abortion, pregnancy and the courage of womanhood.

Female characters in stories and movies don’t always get the best protagonist treatment, The Hunger Games, Divergent and ‘The Fault In Our Stars’ aside, they aren’t that many. It’s even harder to point at a female super hero who takes centre stage. It was very nice to see the females at the forefront of Doctor Who tackling big issues and saving the day and in the case of the episode, saving tomorrow. I feel as though this episode was in many ways an ode to women and the depth of strength they posses and the acknowledgement of the hard choices they are faced with, not having the option to simply walk away.

The contention at the end of the episode is a credit to Clara’s development as a character as well as The Doctor’s. It’s going to be fascinating to see what happens next. The Doctor’s dismissiveness during the vital decision-making could be seen akin to a father of an unborn child not taking responsibility for what is at stake (a life) as he offers no support. For Clara, as it would be for a woman going through the trial of keeping a baby or aborting it, it would be unforgivable and Clara is convinced of that notion and is completely offended by The Doctor. A rift has opened up between Clara and The Doctor in what has been a fresh and exciting series, we can only hope for another incredible episode. Bring on episode 8!