Is it just me, or does anyone else think Barack Obama and Joe Biden have an aversion to meeting Israeli Prime Minister Benjamin Netanyahu? Perhaps they don’t like his aftershave, or perhaps it is his unwillingness to take orders from them?

As of Friday, we heard that Joe Biden will join what looks a lot like an official White House snub of Netanyahu, skipping out of attending his controversial speech. Netanyahu’s speech is to be delivered to Congress next month.

A White House official said, “The Vice President’s office expects that the Vice President will be traveling abroad during the joint session of Congress.” As president of the Senate, Biden would normally be expected to attend any joint meeting, but he declined.

Since Biden became Vice President in 2009, nine foreign leaders have addressed Congress. Biden only missed one, that of then Australian prime minister Julia Gillard in 2011. Netanyahu’s address will be the second. Going on an overseas junket is apparently more important for Senator Biden.

The White House political soap opera script has President Obama saying he will not even meet Prime Minister Netanyahu during his visit.

The speech before Congress is expected on March 3, a few weeks before the Prime Minister seeks re-election in Israel’s polls.

The White House has a perfect escape from the charge of this being a snub. They said it is a “matter of long-standing practice and principle” that the president does not meet foreign leaders engaged in an electoral campaign.

Others say that Obama is annoyed by the subject of Netanyahu’s speech, which will be the nuke-seeking clerical regime in Iran. They say Obama is worried Netanyahu’s trip will be used by Israel and Republicans to undercut nuclear talks with Tehran. The Republican-controlled Congress invited the Prime Minister, so it could be true!

Many in the West and Israel accuse the Islamic republic of trying to build a nuclear bomb. Iran denies the charge, but their centrifuges are turning at a breakneck pace.

Last Wednesday, a spokesman for House Democrat leader Nancy Pelosi expressed concern that “casting a political apple of discord into the relationship is not the best way forward given the formidable challenges our two countries are facing together.”

The White House and Democrats are casting their own poison apples around, ignoring America’s ally and spending time with the Middle East hegemon.

It is possible the Democratic side of the Congressional aisle may be largely empty, if they have been pressured by the White House to skip the speech.

Bernie Sanders, the Independent Senator who caucuses with Democrats will also not attend Netanyahu’s session. To hear what Senator Sanders said, see the video below.

If President Obama was hoping his snub would dissuade Prime Minister Netanyahu from traveling to address Congress March 3rd, it seems that will not be the case. On Monday it was reported that Netanyahu is determined to make the address, in which he will speak about Iran’s nuclear program. He brushed off US fears that his intervention into the debate here could derail talks with Tehran.

Speaking at a Likud party election event in Israel, Netanyahu said, “I am determined to address Congress. That is why I decided to go to Washington and present Israel’s position.”

The White House has already voiced their opposition to his invitation by House Speaker John Boehner. Vice President Joe Biden is not the only one skipping out. It appears that at least some other Democrats are folding under pressure from the Obama administration (including Nancy Pelosi and Sen. Bernie Sanders) and will also not attend.

Barack Obama also said he will not meet Netanyahu at all during his visit, again citing the Israeli elections as a reason.

A number of opposition officials in Israel have apparently pleaded with Netanyahu to cancel the speech so as not to undermine the “special relationship” with the US.

With Obama acknowledging “a very real difference” with Netanyahu over the nuclear talks, this speech may rally American opinion against the White House and their negotiations with the Iranian mullahs.

Netanyahu has brushed aside fears of a dispute, saying: “From the day Israel was established to this day, there have been essential differences between Israel and the US, and relations remained sound – this will be the case this time as well.” 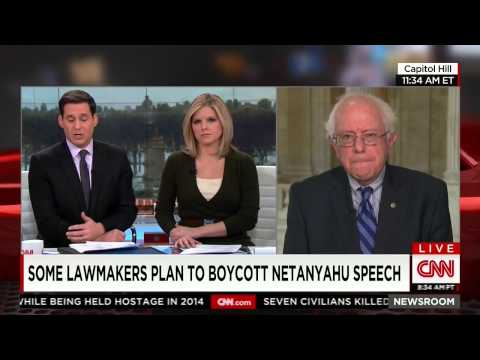