True, the Christopher Dorner fiasco is finally totally over with, but leaves a very bad taste in the collective throats of most Americans, and especially citizens living in the Los Angeles, Ca. area.

Well, perhaps not entirely over with; a modest cache of protesters (around 30, according to NBC4 News) assembled outside LAPD headquarters Saturday afternoon (Feb. 16th).The gist of these protestations were in general the way the LAPD handled the entire ‘Dorner Affair,’ with some specific references of misconduct mentioned (Police Brutality!) in public demonstrations.

No, these protests were humble, not exactly mirroring the epic Vietnam War protests of the 1960s, yet there did appear to be a kernel of honesty to what they were saying, while all along emphasizing Dorner was a vicious rogue killer, whose means to an end were misplaced. 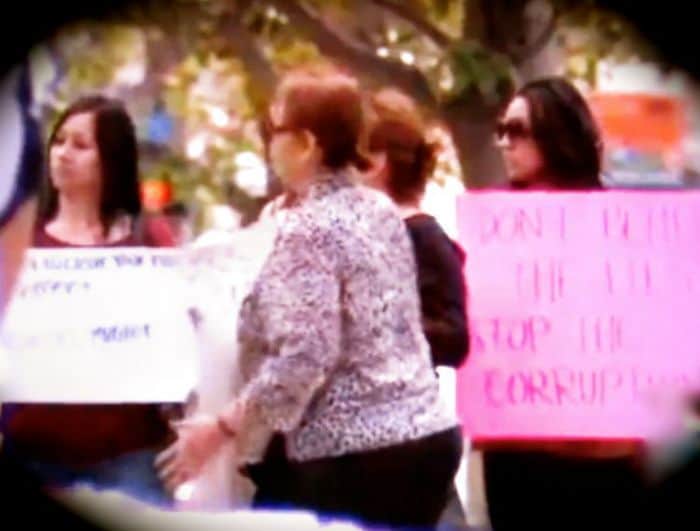 Clearly Dorner lost it, snapped and turned into a twisted criminal himself, such as he formerly was attempting to curtail. *(Or was crime-fighting Dorner’s real motive for joining the LAPD?) But didn’t the LAPD snap also? The Torrance shootings are evidence of this.

I believe, part of what’s behind Saturday’s modest protest, is the entire history of the LAPD, which would need to include the still controversial Rodney King imbroglio. Yet Christopher Dorner knew its history well; this makes me wonder why he ever wanted to be an LA cop in the first place?

He gave them trouble right from the time he began his training. Maybe he had a plan to expose the LAPD right from the get go; a kind of undercover operation, a sting of sorts.

This is a good theory and makes sense in light of his Manifesto and what he ultimately ended up doing. Yea, exposing corruption inside the LAPD is probably what he had in mind all along; the protests make his wish a reality, where procedural faux pax(s) are clearly elucidated.

More than 100 rounds were fired off by the LAPD at a blue truck in Torrance, a few days after Dorner vanishes on the lam, but actually the vehicle contained two innocent black women, who were merely delivering newspapers.

Why weren’t the ladies stopped first before the gun firing commenced? Another major item, mentioned by Vincent Nam, seemingly a spokesperson for the subdued, yet ernest protest, is the tossing of burner gas canisters (pyrotechnic tear gas) into the isolated cabin at Big Bear, where a desperate Dorner was held up in a nervous last stand.

I watched this entire stand off live on television, as did millions of other people. Is the way the police (I realize, this is not just the LAPD) portray this violent closure to the Dorner Incident really the way it went down?

I agree with the protesters; the police intentionally burned down the cabin prematurely, without giving Dorner time enough to properly surrender! I viewed it in real time, and that’s precisely what occurred. I couldn’t believe how big the fire was, almost instantly! The fact that Dorner shot himself in the head was only reported after the fact.

It might be claimed he actually was murdered, since he only shot himself in the head once he knew he was going to burn to death. Too, if he ran outside of the cabin, he would have been shot like a dog with rabies (he knew that, we know that). No, perhaps the Dorner Affair is not entirely over with.

They’re reopening the situation with his firing (characterized as unjust by many), and that’s a good outcome. Did LAPD trainer Teresa Evans assault a mentally ill man at a hotel back on July 28, 2007 (is the pressing issue, I believe)?

And what about those who think of Dorner as a sort of folk hero, a Charles Bronson’s Death Wish character or Clint Eastwood’s Dirty Harry? Well, that may grow. I myself would like to see an accurate, academic history of the LAPD written and published. But what writer has enough courage to undertake such a project?