Because emissions trading uses markets to determine how to deal with the problem of pollution, it is often touted as an example of effective free market environmentalism. The cap is usually set by a political process of government imposing a fixed policy on carbon pollutiion. Instead we have a brand new controlled monopolistic market with individual companies forced to choose how they will reduce their emissions with purchases of futures and commodities contracts.

At the top of this latest pyramid scam is none other than Reverse Robin Hood’s Merry Men, Goldman Sachs with their $3.5 million lobby on behalf of this carbon bill. Subsequently, the masses, the public, and the victims continue to be duped into the belief that these exploitative elites and their Wall Street operative cronies are conducting complex financial transactions that continue to magically increase value for the benefit of investors, thereby saving us from a green house gas calamity.

This law will do nothing for global warming except assist the Wall Street criminal barons and elites. The Cap and Trade Emissions bill is a simple age-old pyramid debt scam which benefits the kleptocrat operatives at the top only. All pyramid schemes are zero sum scams that can never be sustained over time and inevitably collapse.

When the Cap and Trade Carbon Emissions pyramid scam collapses the pyramid scam is turned upside down 180 degrees. The government steps in with “To Big To Fail” illegal forced stimulus money which bails out the Wall Street Reverse Robin Hood operatives once again. The illegal forced taxpayer bailout money transfers instantly – not over decades – to the criminal gangs of Wall Street, so they get paid twice.

This is a repeat of the banking, housing, insurance, mortgage, and auto industry government forced taxpayer bailout scams. The retrofit subtle wording 400 year old pyramid debt scam repeats history c.1720 This is not a bubble, not a Ponzi scheme, nor is it complex mathematical abstract theory.

The new 21st Century America has reached such new low standards of accountability, corrupt moral subterfuge, lawlessness, and incompetent leadership that a comparison to the black hole of Calcutta is but a tiny pin hole. There is no bottom to the continued assault on US citizens.

The demise of the USA is now in effect with every minute of unfolding factual events hidden by corrupt corporate media barons with continued subterfuge, disconnect, and distraction. 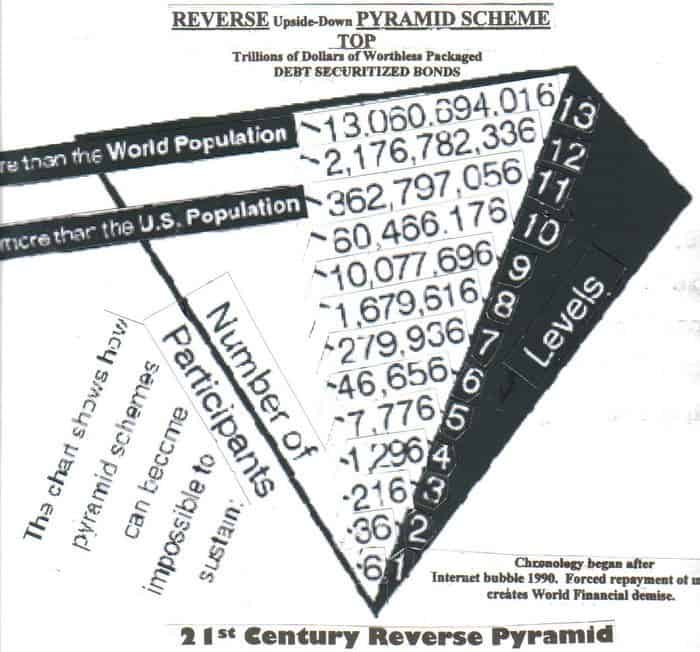