Is that man, disguised in a blonde wig and sunglasses, pointing a gun at us? I believe he is! Rather it’s a black semi-automatic handgun, as captured by a security camera, waved at a teller in Forcht Bank (1881 South U.S. Highway 25E) in Barbourville, Kentucky, on August 19th at 4:50 PM. This is the 4th robbery for the ‘Bad Hair Bandit.’ BHB’s MO =s hitting smaller regional banks, wearing women’s wigs and sunglasses, and getting in and out as quick as a fox.

Not that the wigs particularly hide his physical appearance. He’s obviously a stocky, white man, in his mid-twenties, about 5’6″ to 5’8″ in height, and weighing, perhaps, a little under 200 lbs. From the FBI photos, you can see exactly what his arms look like, his nose and mouth can be observed as well, and his stomach protrudes just a bit (see the FBI photo from the first Jellico robbery). I wouldn’t be surprised if he works out with weights also. 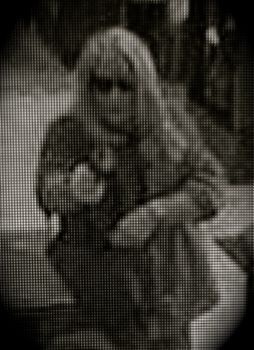 Geography plays an important role in how a bank robber might contrive a scheme to knock over a bank. I looked up Barbourville, Kentucky from a Google search, since it is the location for two of these brazen robberies. Barbourville is in southern Kentucky and currently has a population of 3,589. Yea, it’s a small town. The 2nd robbery on June 17th took place at the Commercial Bank (202 North Main Street) and on the 4th the Bad Hair Bandit hits the Forcht Bank.

I suspect that the BHB frequents Barbourville, since he lives and may have grown up in this part of Kentucky. 2. He hits small regional banks with less sophisticated security systems in place. He’s probably cased these institutions many times over, and has had this crime spree in mind for a good bit of time. 3. Three, is he seems to have an accomplice, which is not such a good thing for him, since an accomplice can go rogue on you in a millisecond.

One oddity is this not so innovative bank robber (his MO has been used a million times before) doesn’t seem to call any attention to himself when standing in line, waiting for the teller to call him up to the cash counter. On the first job (First Volunteer Bank in Jellico, Tennessee) from June 9th, he hands her a note before brandishing his black pistol. But why didn’t other customers notice this ridiculous disguise, where he looks more like Jethrine Bodine from the Beverly Hillbillies than a clever bank robber?

I believe the FBI will be able to nab this character fairly quickly. For one thing, a get-away vehicle has been clearly identified, and has even been confiscated after the 5th robbery in Corbin, Kentucky. The car, apparently, is a white, four-door Chrysler Sebring with a Confederate flag decal on the trunk and a missing hubcap on one of the tires from the passenger’s side.

This car was found abandoned (on Eatontown Road in Corbin) around 3 1/2 hours after the hit on October 25th. The police found out the Chrysler Sebring had been purchased at a Williamsburg Walmart in June. Wow! What a fly-by-night flaky transaction. One suspects the seller must have got a good look at the Bad Hair Bandit, who probably paid in cash and then got the hell out of there. Well, it could have been the accomplice who bought the car, which was slated for the purposes of a desperate spree of bank jobs, that will probably result in premature apprehension, since these thick crooks have left so many loose ends behind. Photos, car, obnoxious MO. Just need to pick em up.

*(Sources: 6 Wate.com, the News Journal, Michelle Sigona, and photos released by the FBI)