Flashing news print images rip past my eyes in rapid succession! No, I’m not tripping, but rather I’m operating a brand new Canon Microfilm Scanner 800 II at the Austin History Center, researching microfilm from the Austin American Statesman. Last Friday I paid a visit to the archive for the City of Austin, since I was curious what they may have on the Austin Punk/New Wave phenomenon (I was mostly interested in the time periods, 1979-1980).

With a five hour ticket (displayed prominently on the windshield of my white, 1999 Ford F-150 pickup truck) purchased from the fancy new digital parking meters, I knew I had to narrow my search considerably, convinced my eyeballs might pop out from their sockets from viewing virtually millions of screens of print news! 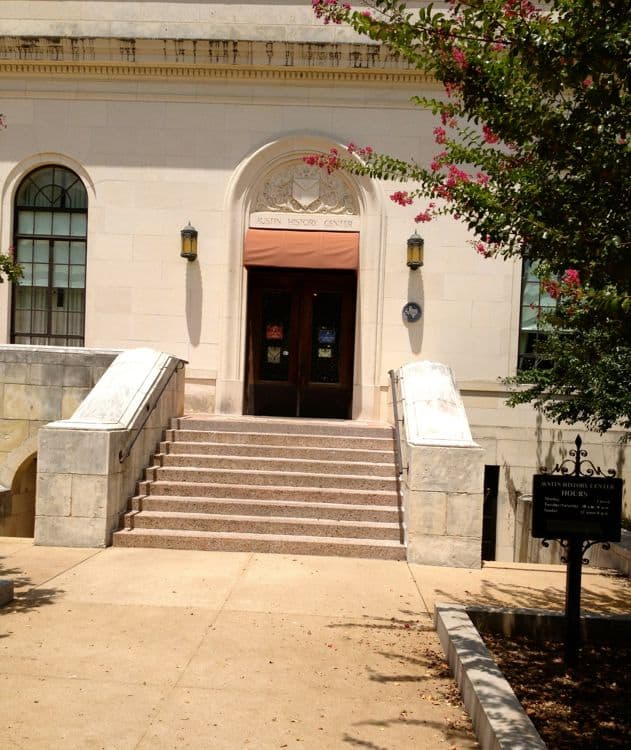 I can’t tell you everything that was running through my mind, as I took this inspiring journey back in time, but I will say, I came pretty close to returning to some of the precious moments of those (more) innocent times, that remain hidden in the rich life of Austin history.

(To the task at hand), I made a once around the block with the state-of-the-art microfilm equipment, practicing my spooling of a reel of AAS records (which includes half a month of newspapers on one tape), focusing, zooming, and even printing out a page that might be of future interest, worthy of a second peek.

I couldn’t find anything published about the scene (perhaps the Daily Texan has quite a bit) for those two weeks. I will mention, however, an ad for the movie Punk Rock, which was playing at Dobie 1 & 2 as a Midnighter, showed up in the amusement section for Friday, May 18, 1979.

The dailies for that time period were interesting, nonetheless. One could see just what the music scene was all about, and what bands and clubs had Austin’s music lovers’ undivided attention. Ad pages for May 18th remind us it was the heyday of clubs such as Soap Creek Saloon, Mother Earth, Steamboat Springs, Liberty Lunch, Donn’s Depot, Abel’s, and (naturally) Esther’s Follies.

Some music artists in the ad that caught my eye, were: Alvin Crow, Uranium Savages, Stevie Vaughn with Double Trouble, Marcia Ball, and Extreme Heat.

The clubs and music artists are (or were) impressive, but New Wave or Punk examples were nowhere to be be found. In the spring of 1979 these movements were already two years old, and yet (what I was seeing streaming past me on the microfilm) appeared to be stuck in the mud of a bygone era, more representative of an earlier portion of the 1970s.

I had to remind myself, news or trends (or changes in attitudes about what’s acceptable in music tastes) yet travel at a snail’s pace.

The Austin American Statesman Pop Music critic for this time period was Joe Frolik, who I don’t seem to remember. Frolik writes one piece on Eddie Rabbit, who was riding a fine line between country and crossover, that gives us pause for reflection, and then in another piece he’s writing about a particularly inspired performance given by Townes Van Zandt at Steamboat Springs.

Yet, nothing (is mentioned) about a newly burgeoning scene happening over at a frantically riffing watering hole on Guadalupe (The Drag), known as Raul’s!

Gad sakes, I have to admit (sorely), I struck out with this chosen spool of film. Later on, though, when studying some twelve AAS print-out pages from late May of 1979, I realized I had learned a great deal (or maybe re-remembered) about what Austin was really like during that time. I noticed a full page ad for the Bee Gees In Concert LIVE! (at the UT Special Events Center, June 29th), had dominated much of this news page space.

The story of the day (I should tell you) was ‘The Killer Bees,’ where a bunch of Texas legislators went underground, since they didn’t want to abide by Senate Bill 1149. But what is most troubling, is that Joe Frolik is writing mostly about musical has-beens, such as Jefferson Starship or the Allman Brothers, blasts from the past (even back in May of 1979).

Alright, so I rewound that no cigar spool of film, took a quick break to the Gentlemen’s Room, then commenced to thread another AAS reel, with the inclusion dates of August 16-August 31, 1980. Bingo! I hit pay dirt on this spool, in terms of pertinent news coverage provided on a small underground music scene, that was out of control, chug-a-lugging along nicely at a rapid pace. 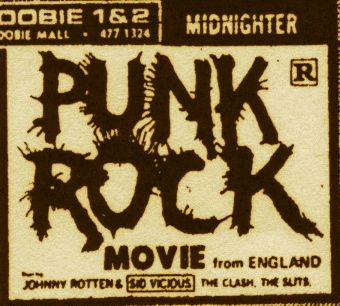 I should let you know here, the AAS had switched journalists in October of 1979 over to Ed Ward, who (we ought to note), was one of the original writers for The Rolling Stone.

Ed wasn’t afraid to give this new scene some representation with news print words, although I’ve heard the powers that be at the AAS (from that day) recommended he remain on the straight and narrow path, Yellow Brick Road of ‘Willie ‘n’ Waylon ‘n’ the Boys,’ if ya get my drift.

I found several pieces of his that mention the New Wave scene, but one column of Ed’s from August 30, 1980, is especially filled with news (which many years later we would have to consider to be groundbreaking).

The headline for Ward’s column that day was: Blondie tasting sour grapes over biography. Well, it seems as if Lester Bangs had written an unauthorized book on sensational New Wave band, Blondie, where they had initially praised Lester for his biographical effort. 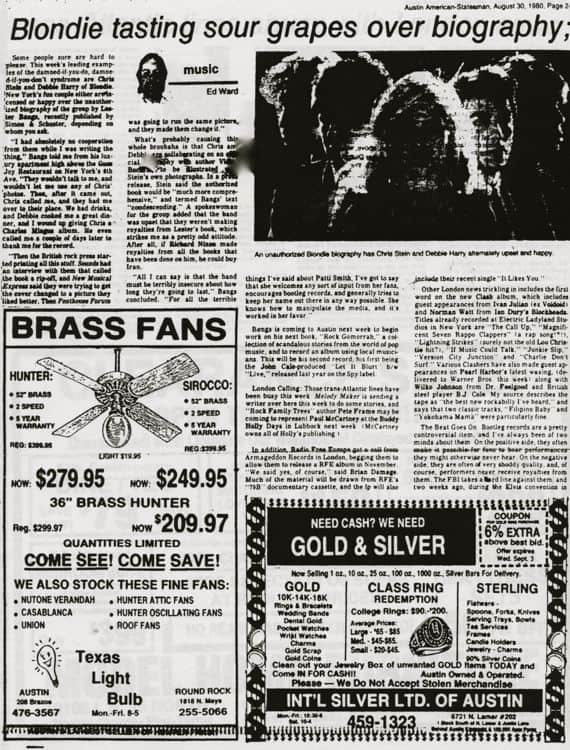 After their friendly visit with Lester, they had slammed him behind his back to major British musical publications, apparently to defend a newly authorized portrait of the band (that was in the works). Later on, when Lester came to Austin in ernest, we heard about his rift with Blondie, over at the Contempo Culture House (headquarters for a fanzine touting the Austin New Wave drift).

Moreover (or furthermore), Ed tells us Lester would be coming soon to Texas to start on his new book, Rock Gomorrah, which I don’t believe he ever got around to writing. Most interesting (to me), is Ed’s mention that Radio Free Europe got a call from Armageddon Records in London, expressing an interest in releasing an RFE album in November (1980, folks).

Ed goes on to talk about the fact that The Clash were in the studio working on a new album. This would have to be Sandinistas!, a record given to me as a present for my birthday, by that lively aforementioned Contempo Culture bunch (Stewart Wise, Al Hernandez, Ellen Gibbs, Kathy Darr, Cheryl Gant, Gail Gant, a new member, Lester Bangs, and perhaps even yours truly can be included)!

Jeez!, On page 25 of the AAS, Blondie tasting sour grapes, Ed sneaks in some local music news as well, in the way of record releases. The Reactors, Gator Family, and F-Systems were all slated for single releases (can’t give you the exact dates, but I believe these singles saw the light of day near to the date of the article, which was August 30, 1980).

Oh, and one other item Ed mentions in passing, is an imminent September release of a full 17 cut record from the Re*Cords! I know this one made it, since I have a CD copy and a cassette copy sitting proudly right next to my HD TV (today)!

Well, it’s hard for this generation of musicians to understand, but getting your name dropped by Ed Ward’s “The Beat Goes On column,” was the equivalent of a simulated rock stardom back in those days. So, I laughed to myself in disbelief for my (believable) transcendental sojourns into the past, then I glanced at the clock on my iphone.

Okay, my parking meter ticket will run out in about ten minutes, so I paid for my copies and hurled my tattered bones out the squeaky door, that covets the Austin History Center, where time travel is legal. I’m getting tired now, but so many other anecdotes you’ll die to hear, rest comfortably in an archive cabinet, on hundreds of microfilm spools. (Like Ed’s two part story on the final days of the Armadillo).