Nanette Johnson, Bill McLaughlin, and Eric Naposki are very familiar to me; I’ve researched and written on this case before. That’s why I felt a great deal of enthusiasm when True Crime author Aphrodite Jones featured the gold digging murderess Nanette Johnson’s story on Investigation Discovery (Sex & Death in the OC). It’s been a few years since Aphrodite’s True Crime series on ID has featured a new story; this one manifests a lot of preparation, whereas Aphrodite goes to Newport Beach attempting a reconstruction of events of Bill McLaughlin’s murder.

Reading about the case is one thing for me, but seeing this beautiful, effluent community in person is another thing all together. Okay, so there’s Bill’s mansion Balboa Coves! Now I have a better grip on Nanette’s motive for murder, she wanted to get her hands on Bill’s money and that’s exactly what she was able to accomplish. Well, she got away with it for many years, until Orange County District Attorney Matt Murphy dug up this cold case, thinking he had enough to nail Johnson and Naposki.

Aphrodite uses actors to recreate many of the important scenes; also, she uses plenty of photographs from the day that bring you back into the events that are still shocking to us today. An example would be images of the actual checks that Nanette wrote, forging Bill’s signature on the checks, that successfully milked McLaughlin out of a half a million dollars in cash. The (trigger) motive for the murder is much clearer to me now; a check for a quarter of a million dollars was forged on December 14, 1994, the day before the murder. 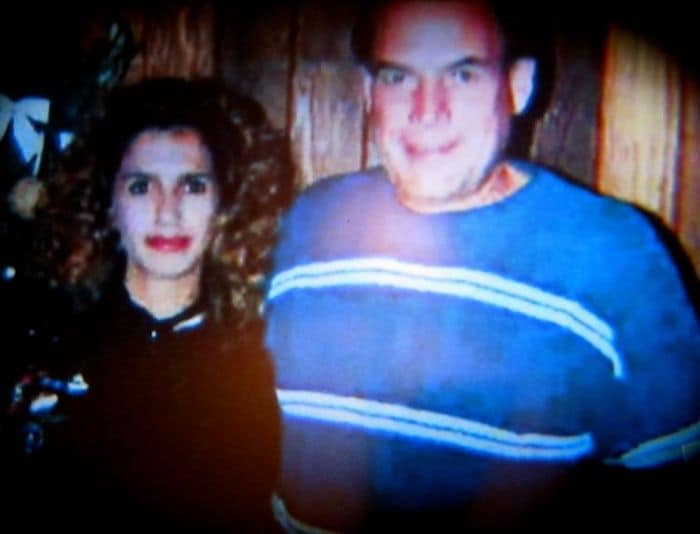 Therefore, Nanette wanted to milk her rich sugar daddy for every thing she could get before a quarterly tax audit would be performed. She knew that Bill would be gone the very next day; still I wonder how she thought the forgery wouldn’t be discovered? I’m sure she did but didn’t care, thinking she take a chance. Of course, she’d already stolen $250, 000, so I don’t suppose there was any turning back. She seduces and sets up ex-NFL washed-up jock, Eric Naposki, to be the hit man with utter grace and panache.

An important element of Aphrodite Jones’ True Crime special is to interject a confidential conversation, one on one with the camera, telling us what all this means. You might remember, William Shakespeare did this effectively in many of his famous plays, such as A Comedy of Errors, or my favorite, the villain Iago intimating how he’ll set up Othello, to be gripped with jealousy over Desdemona’s apparent infidelity. That is, she can convey to the audience how she feels about what she’s seeing with the evidence.

This speaks volumes to me; an investigator’s impressions of the crime are constantly evolving, and are not exact duplicates of previous detectives working on the case. The good thing here, is that Aphrodite forms all of her theories from primary evidence. She interviewed Eric Naposki in jail, and this serves as the center piece of the show. It’s pretty clear to me now, he’s the one who shot William McLaughlin 6 times in the chest with his Baretta 9 mm at around 9:15 PM, December 15, 1994, in his Balboa Coves’ kitchen. The simulation is eerily realistic and shocking; this surely is the way it went down!

The situation with the two keys is what helped to nail both of these culprits. Hell, OC detectives found the duplicate key impression receipt made by Eric (of the Balboa Coves front door) at a local hardware store. He’d left it in the door, apparently still stuck in the keyhole, when he went to do his deed. And he dropped Nanette’s entrance key when startled by the presence of Bill’s son, who wasn’t suppose to be there. Eric might as well left his driver’s license on the floor! I’ll have to run this tape again.