American Atheist is an organization founded in 1963 placed a billboard with a $20,000 price tag at the entrance of the Lincoln Tunnel connecting NYC and NJ.

The Billboard says you KNOW it’s a myth, this season let’s celebrate with reason. Look closely and you see the nativity scene, three wise men and the Star of David. It has incited much controversy and sparked a Billboard showdown with Christians. Another Billboard was placed across the street saying, “You know it’s Real, This Season Celebrate Jesus.”

This is not the only time they have used advertising to get their message across. In 2009, an anonymous $25,000 donation paid for ads blanketing New York’s subway stations. “A Million New Yorkers Are Good Without God. Are You?” Many were vandalized. Try vandalizing a church and see what happens! But is it ok to vandalize the Atheist? 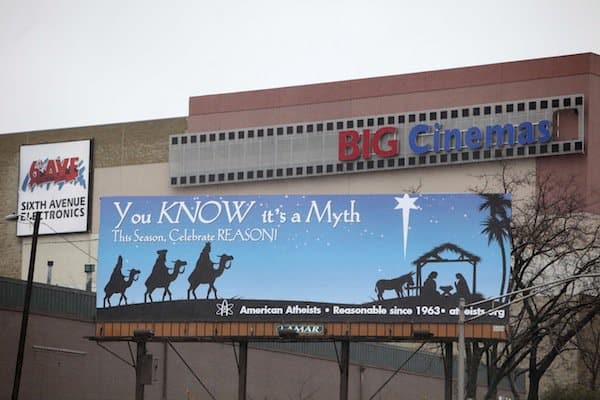 They have been criticized by religious groups who claim American Atheist are ruining Christmas, Scrooging New Yorkers and the usual, have no morals, blah, blah and blah.

I have so many issues with this. So where do I start? Ok, let’s start with this:

First of all, American Atheist have every right to post whatever and wherever as long as they have the funds. Religious groups are up in arms and basically Pee’d off because the organization is able to raise money just like them. American Atheist does NOT make anywhere near the amount of cash that the good Old Catholic church. The Catholics make billions of dollars in the church. Sell the Vatican, donate all of their money and you know what? World hunger solved!

Freedom of speech, freedom of press, separation of state and church all give the Atheist the same rights as Christians.

American Atheist is an organization of people who do NOT believe in a deity and want to teach tolerance and evolution to the masses. They are not very different from what Christians, right? Except this, as a member you receive monthly magazines, invitations to events like the 2012 bash, yearly convention and even offers scholarships to students. The website contains tons of information, tools and techniques to better deal with the bullies.

It is estimated that Atheists account for about 16% of the population. This is only a rough number since there are lots of Atheists in the closet. Pretty large number seeing that out of the 300 million people in this country, 75 million are children. Why are they in the closet? The church has been able to rule this country and most of the planet with their BS. Once upon a time if you disagreed with the church you were killed. Now, anyone that disagrees with the church is socially killed. Disgusting.