Was Donald Trump compromised by the Deep State to attack Syria? It looks like an attack the war hawks of the US, the UK and France were pushing for. Was Trump forced into a position where he may be starting World War 3 against Russia, based on false evidence? The fake news mainstream media is salivating because war makes people watch TV. Congress and the media want it.

It appears the White Helmets staged a False Flag, a fake chemical attack they blame on Assad. The White Helmets always document their efforts with video. They showed a few people running into the area that was supposedly bombed by chemicals. They run in, unprotected, with no protective gear. Then, they pretended to wash chlorine off men and children – no women – probably because they didn’t want to touch women. Watch the videos and it is obvious there was no chlorine or other chemical agent in the area and the people were not affected by any agent.

I did 5 years of Chemistry at school and college. Chlorine can hang around at concentration for at least a day, so many of those people who were washed down should show major discomfort, be screaming or gasping or dead. Not only that, but skin irritation should be causing them major problems and the soft tissue in their nose, mouth and airway should be burning, yet nobody in the room shows any sign of distress, other than the kids because they are being manhandled. The men who rushed into the buildings should all be gasping or dead too.

One more thing – washing down with water does not remove chlorine or other chemical agents! These people are terrible actors, but the White Helmets are doing their best, as paid actors. They only care about being paid and feeding their families, thanks to US, UK and French taxpayers.

The US, British and French intelligence and military services should not have been taken in by this acting. That must mean they don’t care about the evidence. Did they want to use their expensive weapons to make a point or is there something else going on?

The official story is that Bashar Al Assad used chemical weapons on civilians. Why would he do that? The US was preparing to pull out of Syria. Russia was preparing to pull out. Assad was winning. Most of the terrorists that Assad and Russia have been fighting had left the area. Only one main terrorist group remained, and the supposed humanitarian White Helmets. The “chemical attack” story makes no sense. It is an obvious lie.

Note that there is still no evidence of the fake chemical attack a year ago. 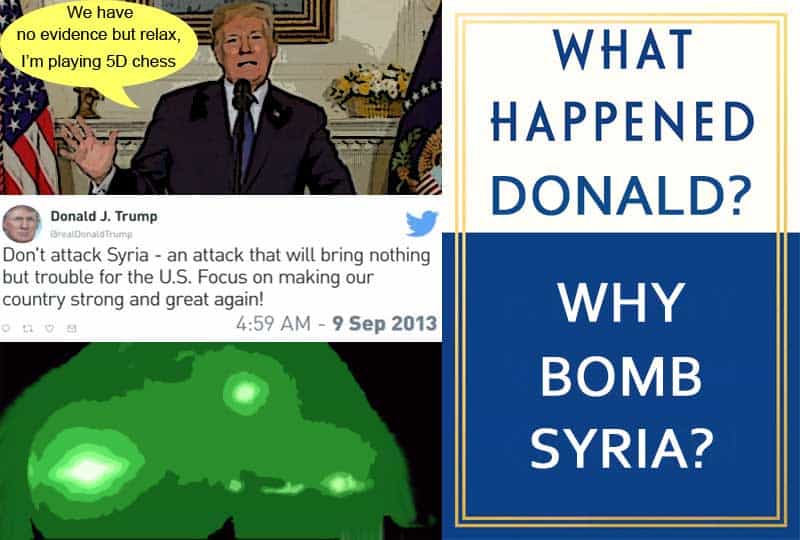 Only One Justifiable Possibility

Given that the evidence is obviously fake, I see only one justifiable possibility for the bombing. That there was evidence of things they wanted to destroy before leaving the area to Assad, Iran and the terrorists.

An unjustifiable possibility is that it is a pretext for regime change.

So either Donald Trump has been pushed into a corner somehow or it is a way of cleaning up before leaving. It could be that Iran or the terrorists had rockets or other weapons stored in the places bombed.

The White Helmets were started by a British ex-military officer, James Le Mesurier. Then they were funded by the US, UK and EU governments with around $100million of taxpayer money. The White Helmets fabricate evidence, often carry weapons and have been observed killing Syrian soldiers. Real Syrian civil defence groups call the White helmets terrorists.

In the video below, Eve Bartlett, a real Canadian journalist who has actually been to Syria takes questions from MSM journalists who have not set foot in Syria. They want us to think they are impartial, but she tells us the MSM rely on terrorists for their information.

The next video tells the story of the White Helmets. There are many videos showing how untrustworthy the White Helmets are. Search for their name on Youtube. And this is the group documenting the Assad regime’s culpability for the alleged chemical attack. A group that received $23 million from the Obama Administration, 65million pounds by the British government and unknown amounts from France.

The military industrial complex is alive and well. Presidents Eisenhower and Kennedy may be spinning in their graves today. I believe Donald Trump is pushing it back. Future events should prove this theory.