There’s still no sign of collusion with Russia by the Trump team, despite intensive efforts to find it.

Michael Flynn apparently had 19 interviews with the Special Counsel. He obviously gave them nothing they could use to attack Trump. The pleadings show nothing.

Special counsels can destroy anyone by making them spend all of their money, and that’s what Mueller did. The counsel can also destroy family and friends and connections. It seems that’s why Flynn agreed to plead guilty, so they would leave his family alone. 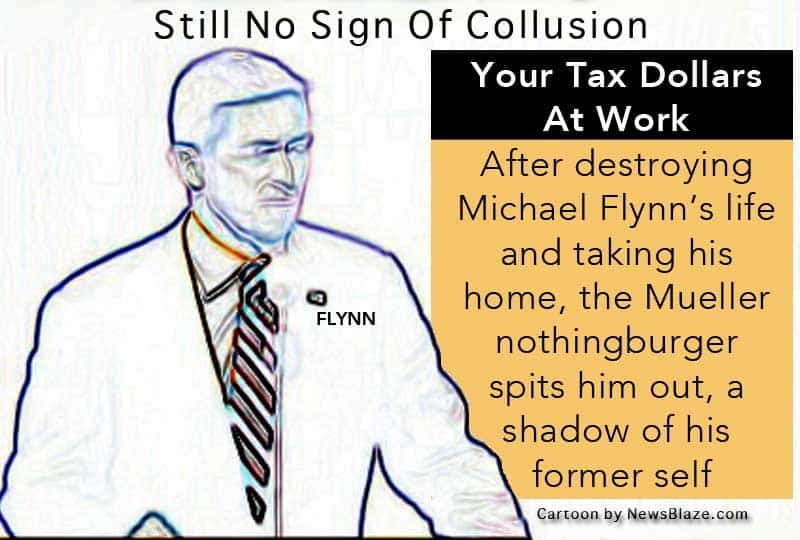 This is an out-of-control Justice Department. They appear to be purposely harming the US relationship with other countries around the world. It looks like they brought it out this week to harm Trump while he was overseas. But Trump won’t care much.

Special Counsel is said to be recommending no jail time for Flynn.

What was the premise they went after Flynn on? Russian interference in the election, and Russian collusion to affect the outcome. No mention of that at all, just that he lied about a contact.

It looks like the whole thing was a lie, a trick for Democrats to try to stop the steamroller that is Donald Trump getting anything done. But Trump has used the past two years to push his agenda forward. That proves once again that a determined leader can achieve things even with massive forces arrayed against them.

If Democrats had chosen to work with Trump, they could have been part of his success, and they could have used the time to formulate some kind of platform. But all they really have is “we hate Trump.”

Even though Democrats picked up House seats in the recent midterms, that means little. In the midterms, incumbents do generally lose. The miracle that is Donald Trump actually minimized republican losses. Here is a table that shows how other presidents’ parties fared in their own midterms.

With Trump as President, Republicans lost 38 House seats. Democrat talking heads are gloating over that, but they don’t acknowledge that it is a relatively small loss. Obama lost 63 in his first midterms, and a further 13 in the second. Bill Clinton lost 53, GW Bush lost 30.

Democrats still have no meaningful platform, so they still appear to be counting on Russia, Russia, Russia ad their campaign mantra. Only time will tell if that’s a good strategy.