The DNC lawsuit, designed to prove the unprovable, which the FBI, the CIA, the NSA and the Inspector General could not prove will backfire on the DNC. Donald Trump and Donald Trump’s campaign did not “collude with the Russians,” nor with Wikileaks.


The Obama Administration, The DNC, Hillary Clinton and the Hillary Clinton Campaign for president all had a lot more to do with Russians, Their genuine emails, copies of which are held by WikiLeaks, will prove it.

The DNC is on a mission to self-destruct. Their “Russia, Russia, Russia” calls, backed up by the corrupt non-journalistic mainstream media resulted in no findings against Trump and his campaign. What was eventually found is that some Russians paid for facebook ads to test distracting Americans in an election year. Those distractions clearly did not have a political bias for one candidate, because some were anti-Tump and others anti-Clinton.

The Special Counsel apparently indicted these Russians for paying for ads that Facebook, an American company, vetted and allowed to be published. That sounds like a felony right there. NOT!

The DNC, unhappy that the FBI, DOJ and Special Counsel found nothing, decided to take matters into their own hands, with a lawsuit against their nemesis. Democrats disrespected their black and latino base, treating them like naughty children daring to disobey commands.

This new lawsuit against Trump, Wikileaks and Russia obviously has not been thought through. It is perfect! What Democrats have not thought through is that filing a suit opens both sides to discovery. Obviously, the defendants have little to hide – the FBI found nothing. The plaintiff, on the other hand has a lot they don’t want to come out into the light.

That’s why this lawsuit will backfire on the DNC, Hillary Clinton, her campaign, their financiers and even Barack Obama. It could be a complete disaster for them.

The DNC is in a sad and sorry state. They used their base to attack Donald Trump, the man whose policies resulted in record low unemployment for blacks, hispanics and women. The DNC lied about Trump, misleading their base, feeding their fears, hoping to get them to do DNC dirtywork.

Realizing that Democrats have lied to them, many more blacks and hispanics are now thinking for themselves and standing with Donald Trump. There have always been black intellectuals, black free-thinkers and small numbers of black republicans. But now, thanks to the overconfident stupid DNC playing dirty tricks,more blacks are waking up to the lies.

This not to say that Republicans are perfect. Far from it. There are corrupt politicians on both left and right. This has already been seen in some of the many resignations of politicians in the past year.

This DNC lawsuit is so implausible that a rational person could conclude they actually want to get rid of corrupt democrats in their ranks. 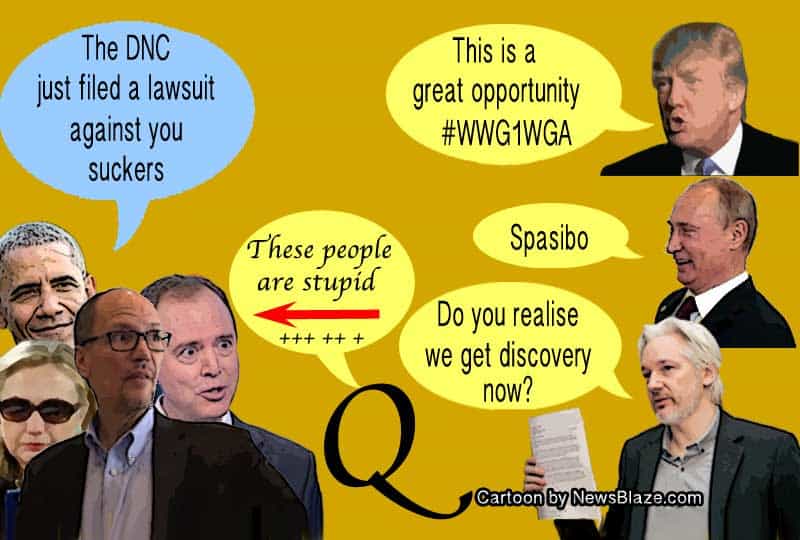