DETROIT – There was some confusion about the anniversary date and the guest of honor was late but the Detroit Historical Society hit a giant home run by hosting former Tiger Ron LeFlore and showcasing the ONE IN A MILLION biopic. It was standing room only as the Detroit Historical Museum also presented their special exhibit of the Lindell A.C. An afterglow and reception followed hosted by the Buddies Pizza of Detroit metropolitan fame.

It started off with an introduction by Dave Mesrey, who also acknowledged former Tiger Ike Blessitt. He gave a short summary of the Friends of Historic Hamtramck Stadium and what their mission statement is all about.

Executive Director of the Detroit Historical Society, Elana Rugh introduced the movie, ONE IN A MILLION, starring LeVar Burton. In 1977, Burton was coming off the hugely popular mini-series ROOTS.

Also in the audience was poet-writer-activist John Sinclair. Sinclair spent over two years of a 10 years sentence in Jackson State Prison (Southern Michigan Correctional Facility). His case eventually went to the Supreme Court of the United States. “Ronnie used to bring me my meals in cell block-5 at Jackson,” said Sinclair.

Leflore, who lost a leg to circulation problems, was in great spirits. He graciously answered a myriad of questions posed by journalist and broadcaster, Terry Foster. Before he became a sportswriter, Foster used to flip burgers at the Lindell A.C.

LeFlore’s story is incredible and most improbable. In the winter of 1970, 21-year-old LeFlore and two accomplices robbed a bar on the east side of Detroit across from the old Chrysler Stamping Plant. The Detroit Police quickly caught up with them, and LeFlore was sentenced to five to 15 years in Jackson State Prison.

LeFlore hadn’t played any organized baseball growing up, but with little to do behind bars, he soon joined the prison baseball team. He did thousands of push-ups. His first game was May 18, 1971 for the prison team. (They only played home games.) In just three years, he was the starting center fielder for the Detroit Tigers.

Among those in attendance were some of the actors from ONE IN A MILLION including Raymond Rolak, Mark Orr, Henry Maynard and Liz Butsicaris-Jackson. Rolak, Orr and Maynard, played in the baseball scenes. “It was the best six weeks of my baseball career,” said Orr, who played at Western Michigan University. Rolak who played baseball at Wayne State added, “I got three months work out of the project including going on location in Toledo, Jolliet, Milwaukee and Chicago. Mike Bennet and I were featured at the original Comiskey Park. We had a reunion with former Detroit teammates and opponents, Bill Nahorodny, Jim Essian and Chris Knapp.”

ONE IN A MILLION was a made for TV movie on CBS and was also a theatrical presentation in Europe and Japan retitled A MAN OF PASSION. The project was produced by Roger Gimbel, William S. Gilmore and the music giant EMI.

LeFlore thanked all those who invested in his baseball career including Chuck Lewis of Pingree Park with the Detroit Parks & Recreation Department. LeFlore was not unknown to the coaches at Eastern High School because of his speed but he was kicked out of school after his freshman season at age of 15. 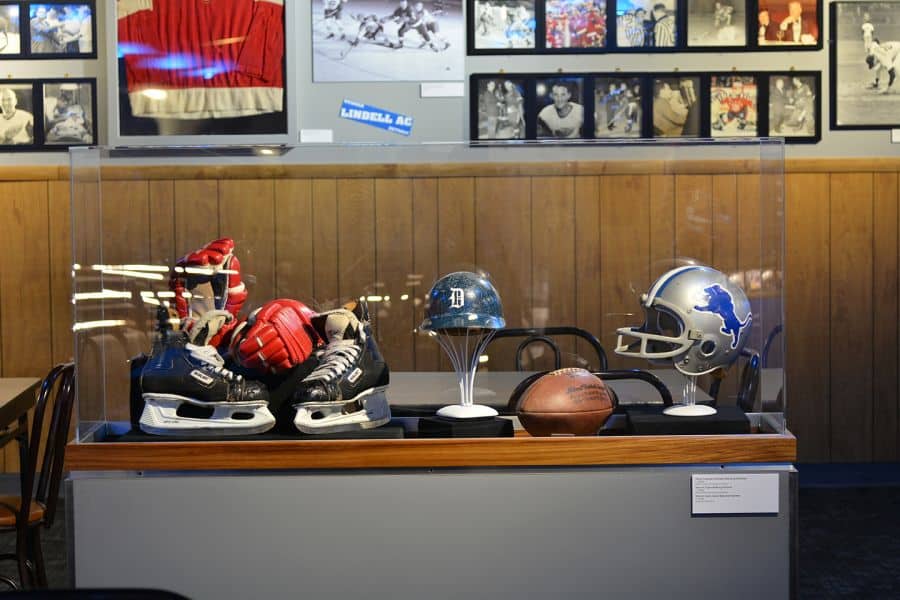 LeFlore had special gratitude for Jimmy Karalla, the Butsicaris brothers (Johnny and Jim) and Billy Martin. It all started with a letter from Karalla to Jimmy Butsicaris in 1973. Leflore’s story is truly a one in a million tale now morphing from folklore to legend.

Martin visited Jackson State Prison on May 23, 1973. Along with Butsicaris, Frank Howard and Ernie Harwell, but the scouting trip was rained out. Martin then helped LeFlore get permission for a day-parole and a tryout at Tiger Stadium in June. The rest became Detroit history personified.

“Isn’t this room wonderful, look at the Bird’s jersey on the wall, that is a whole lot of history,” said Mel Butsicaris during the event. LeFlore along with Mark Fidrych, were the primary reasons that the Tigers’ attendance rose in 1976 by close to 5,000 per game over the previous year. LeFlore, Fidrych and Rusty Staub made the 1976 American League All-Star team representing the Tigers.

The next baseball event hosted by the Detroit Historical Museum is the NEGRO LEAGUES FILM SERIES: THE JACKIE ROBINSON STORY. August 24th and 25th 2019 | 1:00pm to 3:30pm.

Also showcasing at the Museum until September 29th, is the Detroit Stars & The Negro Leagues. It is a presentation and history of the teams and legendary players who played America’s pastime during the era of segregation. This was when African Americans were banned from playing in the major leagues. The exhibit, organized by the museum’s Black Historic Sites Committee (BHSC) in partnership with the Friends of Historic Hamtramck Stadium and developed by the Detroit Historical Society, marks the 100th anniversary of the founding of the Detroit Stars and showcases the remarkable saga of their Hall of Fame outfielder Norman “Turkey” Stearns.