CHICAGO – Milt Pappas, former professional baseball player was found dead in his suburban Beecher, Illinois house on Tuesday of natural causes. It was unexpected and a shock to his family. He was 76.

Pappas led Detroit Cooley High School to the Detroit Public School championship in 1957 with a 5-3 victory over Cody High School. The game was played at night because it was the grand celebration of the newly lighted Butzel Field. This was a departure of from being held at the traditional Major League Briggs Stadium, which had been the custom. It was standing room only at Butzel with an estimated 6,000 in attendance. “Cody was not used to playing under the lights so my fastball looked quicker,” Pappas told Morris Moorawnick of the Detroit Times sports department. On the year, as a position player, he also hit an impressive .500.

Pappas was scouted heavily and rejected a modest bonus from the Detroit Tigers to sign with the Baltimore Orioles. He was given a personal tryout by Orioles manager, Paul Richards, who liked the control of his fastball.

“I was with my dad down at the stadium working out for the Tigers and afterwards went up to John McHale’s office. He knew what the Orioles were going to give me. I did the talking. He didn’t up the price. I appreciated what the Tigers did for me but Richards really took an interest with me. The Tigers didn’t match it. Hal Newhouser scouted me to Richards,” said Pappas in a 2012 television interview.

In 1956 while playing for Internal Revenue Post # 561, he was awarded the Kiki Cuyler Trophy as Michigan American Legion Most Valuable Player. He had great success when paired with his Cooley High School catcher, Larry Cutwright. Cutwright was also a summer sandlot teammate on those Internal Revenue Post # 561 squads and the next season it was his turn to be the 1957 Kiki Cuyler Trophy MVP winner. Detroit Cooley was a sports powerhouse then and Abe Eliowitz, their prep baseball coach said in a 1957 Detroit Free Press article, “We never lost a game in the Detroit PSL when those two hooked up as Cardinals.”

The 6-foot-3 son of an immigrant druggist was on his way to winning 209 games in MLB. The 18 year old right hander made his Major League debut on August 10, 1957 in relief against the New York Yankees. He vividly recalled for me in 2012, at his Michigan Sports Hall of Fame induction when asked about his first game, “I was summoned in relief to face the heart of the New York Yankees’ lineup: Mickey Mantle, Yogi Berra, Enos Slaughter and Moose Skowron.

“My first warm-up pitch went 50 feet over (catcher) Gus Triandos’ head,” Pappas said. “He knew I was Greek so he said a few cuss words in Greek. Next Mickey got a hit — I heard it go by my ear, but I never saw the ball. If it hit me, it probably would have killed me.” He then recalled slowly and told me, “I just started laughing.” Pappas relaxed and then retired the side. Pappas continued, “Some say I was cocky, I say brash – they were only Hall of Fame Yankees.”

In 1958 he made the Orioles’ starting rotation and fashioned a 10-10 record for a sixth place club. He was the first member of a young rotation known as the Baby Birds; by 1961 it included Chuck Estrada, Steve Barber and Jack Fisher, not one of them 24 years of age. Richards watched the pitch count of his young ace carefully.

In those early years, on the road for the Orioles, Pappas roomed with Brook Robinson. Richards thought it would be a calming pairing for Pappas. Hall of Fame broadcaster, Ernie Harwell, also called the games for the Orioles in 1957 and he said, “I knew Pappas would have success, especially in cavernous Memorial Stadium. Teammate and native Detroiter, Art Houtteman, echoed the same sentiments in a Baltimore newspaper.

In 1959, Detroit could brag about two national champion sandlot teams. The 1959 Hamtramck Little League National Champions and the 1959 American Legion National Champion-Detroit Edison Post # 187 squads were hosted with a celebration dinner hosted by the Detroit Tiger’s Baseball Club and Ford Motor Company at the Dearborn Inn. They invited Pappas to be the keynote speaker. With all the Detroit Tiger’s in attendance also, Pappas amused and entertained them. He was still only 20 at the time.

In the wintertime of 1965, Pappas, pitcher, Jack Baldschun, and outfielder Dick Simpson were traded to the Cincinnati Reds for Frank Robinson. There was outrage in Cincinnati from the many fans of Robinson. It was somewhat warranted as Robinson fulfilled his future Baseball Hall of Fame status with an illustrious career. The deal made baseball life difficult for Pappas along the baseball rich Ohio River next to Covington, Kentucky and Cincinnati, Ohio.

In June of 1968 he was traded to Atlanta, shortly after the assassination of Robert F. Kennedy. Several teams declined to play on June 8, the day of the burial, but the Reds’ players voted to play – reportedly by a slim margin and only after they had been pressured by management. Resenting the ball clubs interference, Pappas resigned as the team’s player representative, and he was traded three days later.

While pitching for the Cubs, Pappas was involved in a bitter-sweet no-hitter. On September 2, 1972 at Wrigley Field in front of only 11,144 he fashioned a no-hitter against the San Diego Padres, 8-0. He retired the first 26 batters and was one strike away from a perfect game with a 2-2 count on pinch-hitter Larry Stahl. Home-plate umpire Bruce Froemming called the next two pitches – both of which were close – balls. Pappas believed he had struck out Stahl, and even decades later, he continued to resent Froemming. A Chicago radio personality, during an interview with Pappas, got Froemming on the phone. Pappas and Froemming argued vigorously on the air. Pappas also said in 2006 that he has seen videotape highlight footage of that game on WGN-TV and can see Froemming smirking immediately after the walk was issued. Froemming always denied the charge and said he wasn’t even aware it was a potential perfect game.

The game was a pitching masterpiece with only four balls hit to the outfield. There wasn’t anything close to a hit for the Padres until Enzo Hernandez dropped a nearly perfect bunt down the third base line leading off the fourth inning. The ball rolled foul at the last instant as Ron Santo could do no more than watch. Hernandez eventually struck out.

In the fifth, Cub’s shortstop Don Kessinger made a spectacular play to take a hit away from Nate Colbert. Kessinger raced deep into the hole between third and short to backhand Colbert’s grounder, and then threw him out at first by half a step. The throw was from the outfield grass.

The ninth brought up pinch-hitter Stahl, and with the help of the pitch calls by Froemming, the perfect game ended after Pappas had retired 26 batters in a row. That left matters up to pinch-hitter Garry Jestadt, and he popped out to Carmen Fanzone at second to end the game.

“Milt jumped up in the air,” former teammate and Baseball Hall of Famer Billy Williams recalled Tuesday. “I don’t know what he said, but you’d have to use asterisks and dashes and all that stuff (signifying profanity) if you printed it. He held that against Bruce a long time.”

When asked who his toughest out was, Pappas answered emphatically, “Switch hitter, Ted Simmons, when he was a St. Louis Cardinal.” 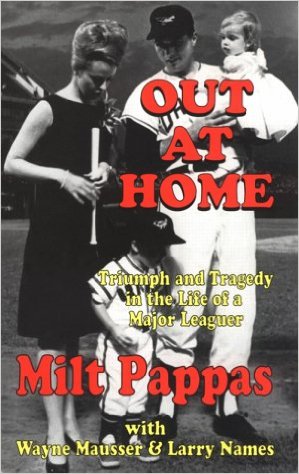 A different kind of controversy involved his wife and high school sweetheart, Carole. On September 11, 1982, she disappeared after leaving their home in the Farnham subdivision in the Chicago suburb of Wheaton. She was 42 at the time. For five years, no sign was found of her 1980 Buick or her body. In September of 1987, workers draining a shallow pond a few blocks from the Pappas home discovered her car. Inside the white and burgundy auto was her decomposed body slumped over. Dental records, clothing and jewelry found on the body, were used as identifying tools. Coroner Richard Ballinger said an autopsy revealed no evidence of trauma to the body.

The DuPage County coroner’s jury ruled the cause of death as an accidental drowning. Police theorized she was disoriented and mistook a driveway near the pond for a road leading to her subdivision. Her car at that moment vaulted 25-30 feet from the elevated bank into the pond. Ultimately, the vehicle was covered with autumn foliage debris and not seen. They had been married 22 years. Pappas authored a book about the tragedy, “Out at Home” and also told the narrative of his life in baseball. He was assisted in the project by Wayne Mausser and Larry D. Names.

His younger brother, Perry, also out of Cooley High School, was known to throw harder. Perry signed with the New York Yankees in 1963 for a bigger bonus and was predeceased.

Pappas was seriously injured in a February 2013 single-vehicle accident in Kankakee County when he crashed into a utility pole and rolled his Jeep Cherokee. He was hospitalized for several days and suffered fractured ribs and a lacerated ear.

He owned a restaurant in Baltimore, Milt Pappas’ Scotch & Sirloin and in retirement kept busy representing a hospitality distributor and later as a Chicago Cub’s ambassador.

“Milt will forever be remembered for one of the most dramatic pitching performances in team history as he delivered a no-hitter that neared perfection in 1972,” Ricketts said. “We will always consider him part of the Chicago Cubs family.”

Editors Note: Raymond Rolak is a veteran sports broadcaster who was honored to know Milt Pappas and his brother Perry.