Andrea will brush the mid-Atlantic coast and sweep over New England Friday into Saturday with locally heavy rain, brief gusty winds and a flooding risk.

Early Wednesday evening, showers and thunderstorms in the eastern Gulf of Mexico had organized enough to become Tropical Storm Andrea.

As of 2:00 p.m. EDT Thursday, maximum sustained winds with Andrea were 60 mph. The storm was located approximately 100 miles east-southeast of Apalachicola, Fla. Landfall is projected to be near or just north of Horseshoe Beach, Fla. at approximately late in the day Thursday. The center of the storm was opening up and wobbling northward a bit. 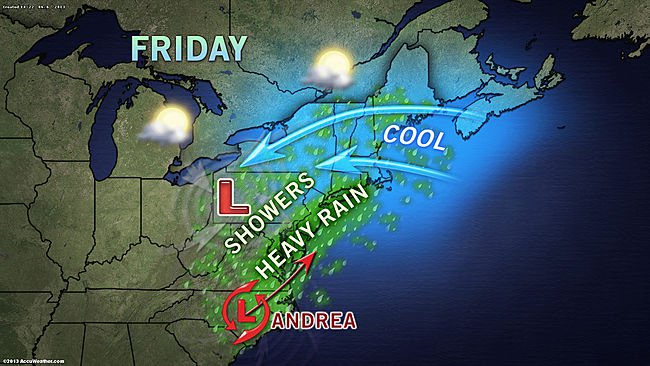 While widespread flooding problems are not expected in the Northeast, Andrea will sweep quickly out of the Gulf of Mexico and northeastward along the Atlantic coast bringing tropical downpours and urban flooding concerns to end the week.

Andrea is likely to retain tropical storm status at least as far to the northeast as the Carolinas. 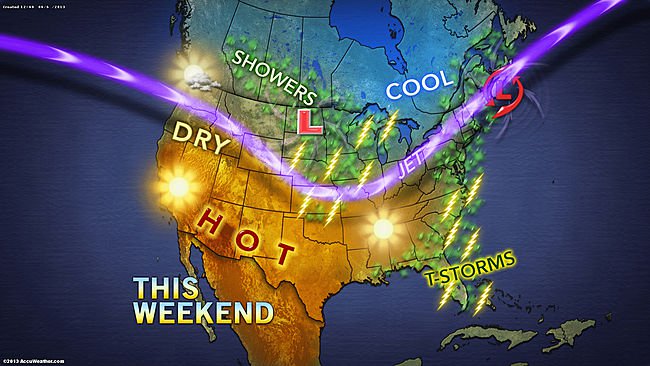 The rain from Andrea will precede the center of circulation by 12 hours or more.

Indications are that most locations in this swath will be in for a 2- to 4-inch rainfall, but locally heavier amounts are possible, especially in southeastern Virginia, Delmarva, southern and coastal New Jersey, Long Island and southeastern New England.

A brief (approximately six-hour) period of gusty onshore winds along the coast will make for locally rough surf and strong rip currents. Bathers should exercise caution Friday and Saturday as the system approaches then swings by. 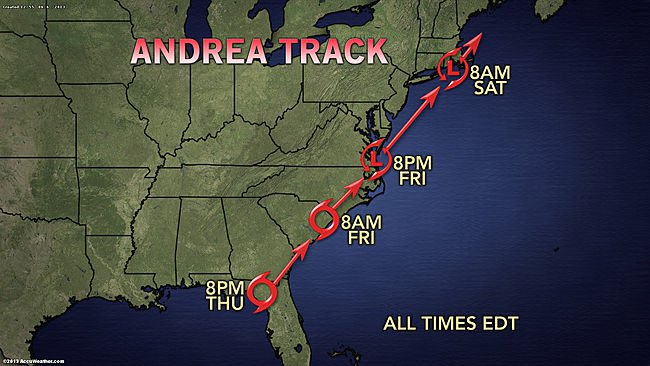 A water rise causing significant coastal flooding is not expected, due to the increasing forward speed and relatively weak nature of the tropical part of the system.

However, higher astronomical tides occur during high tide cycles near and just before the new moon, which is midday Saturday. Brief, minor flooding around time of high tide is possible later Friday into Saturday morning. Water levels can be as high as 2 feet above published levels.

Another component of the rain will be from a storm system moving in from the Midwest. This rain is preceding Andrea’s rain by a day or more but will linger somewhat in Andrea’s wake. 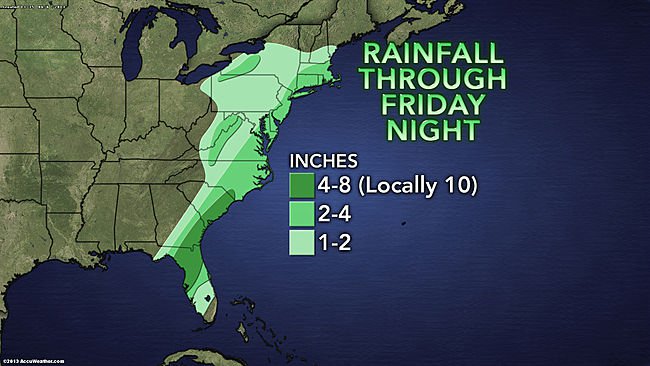 The combination of Andrea’s moisture and the presence of the Midwest system can enhance rainfall over the Appalachians, potentially leading to localized flash and urban flooding problems. Rainfall in this area can top 2 inches in some locations.

Widespread flooding of streams and major river flooding are not expected, due to the quick forward motion of both systems.

In between both main areas of heavy rain on the coast and over the mountains, downpours more spotty in nature will also occur. Rainfall in this area can vary tremendously from location to location, ranging from less than 0.25 of an inch to a couple of inches.

Incidents of power outages and property damage would be very sporadic and should be relatively minor. However, since forecasting the exact location of individual thunderstorms is nearly impossible days in advance, there is the risk of a severe thunderstorm hitting a major population center with more widespread consequences. 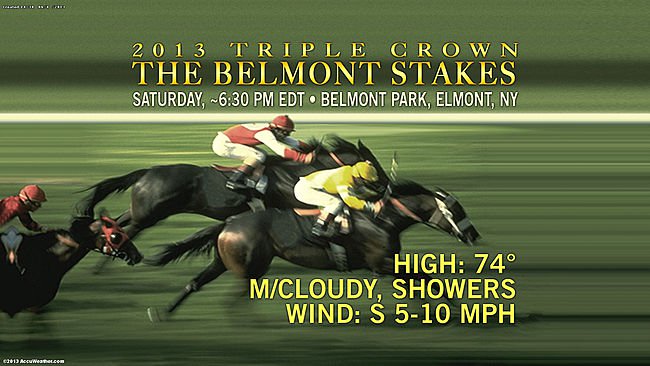 Heavy rain and locally gusty winds and thunderstorms will focus over Nova Scotia, New Brunswick and Newfoundland later Saturday and Saturday night, as both the Midwest and Gulf systems merge into one.

On a positive note for lawn, garden and agricultural interests, the combination of the two storms will bring a dose of rain to many areas. Recent sunshine, low humidity and breezes have dried out the topsoil leaving shallow root vegetation in need of moisture.

The bulk of the rain will leave the mid-Atlantic by Saturday morning and New England by Saturday afternoon and will allow most outdoor activities to resume for the balance of the weekend.

There is a risk of spotty showers in the area during the early evening for the Belmont Stakes on Long Island, N.Y.

However, a disturbance producing thunderstorms around Texas and Louisiana Thursday evening can bring a round of thundery downpours to part of the mid-Atlantic Saturday afternoon and evening.