Although the center of the storm will not make landfall until Saturday morning, the outer rain bands from the storm are already drenching much of the country.

Widespread property damage will be possible across the north, especially near the expected landfall in northeastern Taiwan, which should take place late Friday night or Saturday morning, local time. 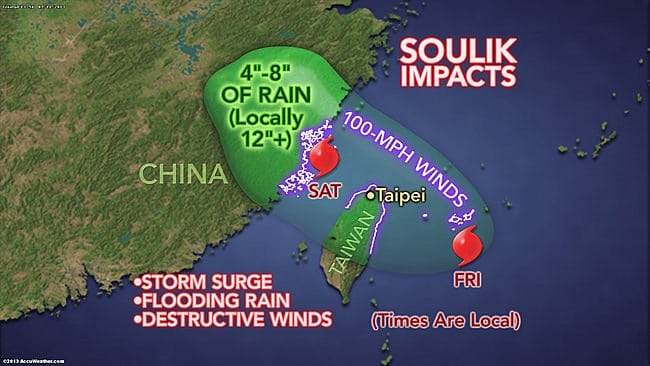 The storm’s severe winds are already pounding the southernmost Ryukyu Islands of Japan. These lie east of Taiwan, closer to the current center of the storm. Sustained winds over 75 mph and gusts over 100 mph have already struck these islands and will continue through Friday night.

As of Friday evening, local time, the eye of Typhoon Soulik was less than 150 miles east-southeast of Taipei, tracking west-northwest at 10 mph (26 km/h). Highest sustained winds were about 100 mph (160 km/h) with higher gusts.

Soulik’s damaging winds and flooding rains will continue across the southern Ryukyu Islands on Friday night, local time. Soulik will then buzzsaw across northern Taiwan on Friday night with winds potentially above 100 mph (160 km/h) near its site of landfall.

Taipei will be subject to damaging winds, potentially topping 75 mph (120 km/h) along with life-threatening flooding.

Heavy rainfall of 4-8 inches (10-20 cm) will be widespread in Taiwan through Saturday with 1- to 2-foot (30- to 60-cm) amounts over the mountain spine of the island. Flash flooding and mudslides will pose significant threats.

Storm surge in the northeast could rise 6 to 10 feet (about 2 to 3 m) above normal high tide as Soulik slams on shore. 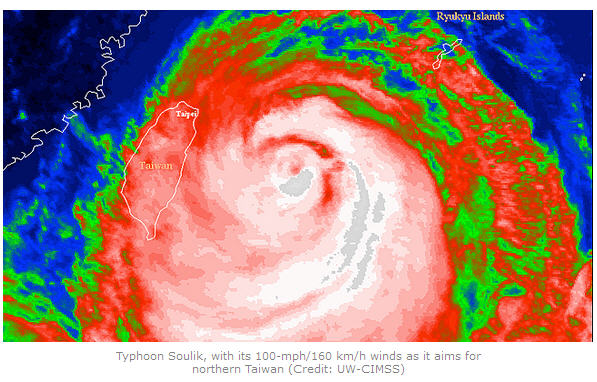 Brief interaction with mountainous Taiwan will weaken Soulik before its expected second landfall on mainland China, likely in Fujian near Fuchou. Nevertheless, Soulik will still be capable of damaging winds and flooding rains as it sweeps inland later Saturday into Saturday night.

Moisture from Soulik will then likely get absorbed into a stalled frontal boundary resulting in the threat for flooding rainfall from parts of eastern China into the Korean Peninsula and Japan. Parts of the Korean Peninsula received 4-8 inches of rain on Thursday from this frontal boundary and additional heavy rainfall into early next week could lead to devastating flooding.

AccuWeather.com Meteorologists Eric Leister and Anthony Sagliani contributed to the content of this story.