The AccuWeather Global Weather Center says although Thanksgiving is expected to be dry, anyone taking part in a parade or watching it, from Illinois to New York, should prepare for cold windy conditions.

The most notable parade is the 87th Macy’s Thanksgiving Day Parade in the heart of New York City.

Accuweather says traveling weather on Wednesday could be “tricky,” but Thursday is expected to be dry and sunny. 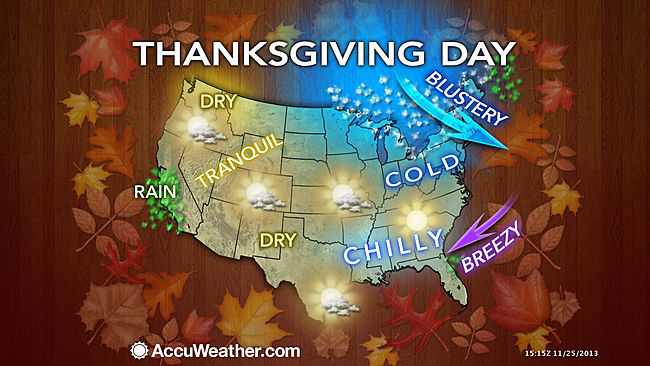 Thanksgiving day is Thursday 28th and it is expected to be blustery in New York, with winds blowing from the Northwest between 15 to 30 mph, with occasional gusts to 40 mph.

The big floats are expected to fare the worst in the wind, and anyone carrying balloons should wear heavy clothes and shoes, because the wind will be a challenge.

Philadelphia, Detroit and Chicago will get their own share of the buffeting winds, but at least it is not expected to be as cold as in the Northeast.

With wind speeds expected to be under 10 mph, these parades will not be as challenging or as cold as in the Northeast.

Information for this story was provided by Courtney Spamer, Staff Writer AccuWeather.com