As soon as pilot whales are sighted in the waters off the Faroe Islands the hunting frenzy takes hold in some of the 48,000 inhabitants. Boats are launched and pods of whales are herded into the next official hunting bay. There in the shallow waters the killers are waiting, to overwhelm the helpless animals with hooks and knives.

The pilot whale slaughter begins, and the water turns into a sea of blood. 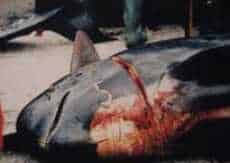 The two activists Juergen Ortmueller, 56, a tax advisor, and Andreas Morlok, 44, an author and management consultant, went undercover. They were equipped with angler’s gear and were accepted by the Faroese as equals.

The two anglers presented the government of the Faroe Island with a petition from their organizations, the Whale and Dolphin-Forum (WDSF) and “ProWal,” containing almost 60.000 signatures against the slaughter.

This sting angling expedition was mainly set up, though, to directly protect the whales. Unobserved, the two activists chartered a speedboat and motored around the island putting “pingers” into the water which emit electronic noises mimicking the call of killer whales.

Pilot whales stay away from orcas because they fear their attacks. Since June of this year almost 700 pilot whales were slaughtered by seven “Grinds”(slaughter locations).

In early August, the whale-protection operation was very effective and since then, there have been no more whale sightings and no more pilot whale slaughter in the eastern part of the Faroe Islands.