At least 10 people have died (including three children) when a tornado almost a mile wide tore through the US State of Mississippi, with many more injured.

The tornado hit at least 13 counties, tearing roofs off buildings, overturning vehicles and bringing down trees and power lines.

This was the first major tornado of the year, after a relatively quiet start to the tornado season. Governor Haley Barbour declared a state of emergency.

A resident in Yazoo City was quoted as saying “We have fatalities, a number of people that we’re still trying to rescue who are trapped in buildings” 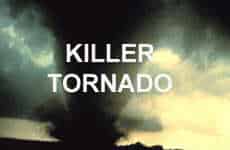 Most tornadoes have wind speeds between 40 mph and 110 mph, are approximately 250 feet across, and travel a few miles before dissipating. The most extreme can attain wind speeds of more than 300 mph, stretch more than a mile across, and stay on the ground for dozens of miles.

Tornadoes have been observed on every continent except Antarctica. However, the vast majority of tornadoes in the world occur in the Tornado Alley region of the United States, although they can occur almost anywhere in North America.

This recent tornado is one of the worst seen in Mississippi for some years, when in November 1992 the County of Rankin was hit by an F4 tornado that killed 10 people and injured 98.