This week, the Doomsday Clock moved one minute back from midnight, indicating that things have become better in the world? Obviously, those who decide which way it goes have not been following the news lately, or perhaps have confused their decision with “daylight saving” time?

The Doomsday Clock is a symbolic clock face that uses the analogy of the human species being at a time that is “minutes to midnight,” wherein midnight represents “catastrophic destruction.”

Originally, the analogy represented the threat of global nuclear war, but has since included climate-changing technologies and “new developments in the life sciences and nanotechnology that could inflict irrevocable harm.”

The closer the clock moves towards midnight, the nearer the world is considered to be to “global disaster.” 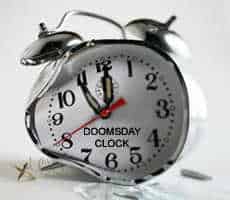 When the “Doomsday Clock” was first created in 1947, the initial setting was 7 minutes to midnight, but has changed periodically since then.

The best “time” ever seen (so far) was in 1991, when the clock showed 17 minutes to midnight, following the signing of the Strategic Arms Reduction Treaty between the United States and the Soviet Union.

Since 1991, the clock has been moving forward, until now, but it is hard to say what could possibly happen in the near future to avoid a return to that trend.

With the problems in the Middle East growing worse with each week, and the threat of another war developing if Iran is attacked, we could easily see the clock returning to the time seen in 1953.

According to some reports, an attack on Iran is almost inevitable, which could lead to a global conflict and the use of nuclear weapons. If true, perhaps the clock should already be at midnight?

However, at the end of the day, the Doomsday Clock is not much more than a gimmick, reflecting the views of a small group of people. It is also perhaps a useful propaganda tool for governments, who could use it to push their agenda on the “War on Terror,” or perhaps hope it stops the falling support for changes against Global Warming, which have not been helped by record cold spells appearing in many countries.

Sadly, if the planet continues on its present course, we can only expect things to worsen over the coming years. One reporter made a valid comment only yesterday, when he spoke about the amount of money spent on the wars in Iraq and Afghanistan, suggesting that if only a fraction of this was invested in Haiti (before the earthquake occurred), their suffering (and loss of life) would be considerably lower.

Unfortunately, Haiti does not possess any “Black Gold” (oil) and is therefore of no financial interest to the western world. However, even though more could have been done prior to this disaster, we should be encouraged by the worldwide response that is taking place.

It would of course be nice if one day the world could help others without seeking some profit, or waiting until a catastrophe happens, but that rarely happens. Although Michael Jackson’s words in the song “Thriller” had a different meaning, they seem appropriate for this present situation “It’s close to midnight”