With the Space Shuttle era shortly coming to an end, it is encouraging to know that space exploration will still continue, even if this will be on a different level.

US company, Bigelow Aerospace, plan to launch an “inflatable” space station in 2014, which should be operational a year later.

The station is based on NASA’s inflatable technology (also called “expandable” technology) and will consist of three habitation modules. These will be launched flat, and expanded like a balloon when in position. 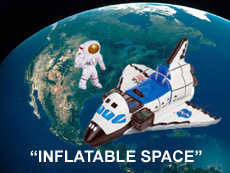 It is hoped that this technology will be used in connection with the US-European James Webb Space Telescope, which will include an infrared sensor developed by UK ATC (UK Astronomy Technology Centre).

The plan is to operate the telescope beyond the Moon, in a spot where the spacecraft can hold its station without using too much fuel.

Whilst it may seem strange to use an inflatable craft, we should remember that the lunar landing module was made of an equally fragile material and not much stronger than tin-foil.

Of course, most people would like to see a manned mission to Mars or at least the construction of a base on the Moon, but we may have to wait a little longer for this to be realized.

Reports seem to suggest that life does exist on Mars (at least in a primitive form), but it would be nice to find out if a more advanced race once lived on the planet, and whether humans might be related in some way. The only way to really discover this possibility is to find out for ourselves.

Although the journey to Mars would be more dangerous than a trip to the Moon (longer exposure to radiation and contact with space objects), it might be a lot easier to establish a habitable base there. Who knows, maybe this can be inflatable too?