According to Robert Cahalan, climatologist at NASA’s Goddard Space Flight Center “For the last 20 to 30 years, we believe greenhouse gases have been the dominant influence on recent climate change.”

This may not come as such a big surprise to those who weren’t so ready to swallow the Al Gore theory. We all knew that Earth has experienced dramatic changes in its history, going from ice ages to periods of extreme heat (even to the point of melting all the ice on the planet).

Many have suggested that the Sun was responsible for these climatic changes and pointed out that low (or non-existent) solar activity often appeared during cooler periods on the planet.

It would now seem that NASA agrees with this finding. Thomas Woods, a solar scientist at the University of Colorado in Boulder said “The fluctuations in the solar cycle impacts Earth’s global temperature by about 0.1 degree Celsius, slightly hotter during solar maximum and cooler during solar minimum,” and added “The sun is currently at its minimum, and the next solar maximum is expected in 2012.” 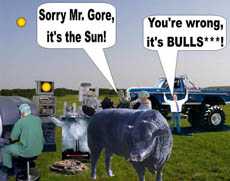 Between 1650 and 1715, almost no sunspots were observed on the Sun’s surface and this is believed to have been partly responsible for the Little Ice Age in Europe.

There have been few, if any, sunspots for some time now, but does this mean we have reached a turning point and can expect temperatures to fall again?

Unfortunately, it is difficult to predict what the Sun will do in the distant future, although the Sun usually goes through an 11-year cycle of activity. We could just as easily expect an ice-age, or a continued rise in temperatures. If I was forced to make a guess, I would say that this is just a temporary break in the proceedings and the temperatures will continue to rise once the sunspots reappear (probably in the next 6-12 months).

Whilst evidence seems to clearly show that the Sun is related to the Climatic changes on our planet, that does not rule out other forces at work. It is easy to be impressed with the power and size of our Sun, and the fact that it makes our life possible. But this is nothing compared to the Universe as a whole. There are many things much bigger and more powerful out there, most of which we do not understand at all.

Who can say there isn’t another factor out in space that is affecting our Sun, or perhaps even our galaxy? We have already seen how some scientists were quick to assume that man was responsible for the warming and seemed unable to consider the “big picture.” Is it possible we may rush into another assumption, before exploring all the alternatives?

It was these unanswered questions that encouraged me to write my book “Global Warming – The Final Solution,” which was designed to create “food for thought” rather than win any literary prizes. It also covers the controversial subject of “Chemtrails” and how these may be related to the Global Warming topic.

Our scientists (and NASA) are perhaps finally moving in the right direction, but I suspect there is a little more work to do yet.