It was hoped that the $278 million Orbiting Carbon Observatory (designed to monitor how CO2 enters and exits the Earth’s atmosphere) would help to provide a clearer picture of how much CO2 we really do produce on our planet.

Unfortunately, after just 5 minutes, the satellite crashed into the icy waters near Antarctica and nine years of work was lost.

According to NASA officials the fairing, a nose cone that shields the satellite as it travels through Earth’s atmosphere, did not detach from the satellite the way it was supposed to and the flight was aborted.

The number of satellites lost over the last 10 years (from various countries), that were designed to monitor climate related situations, has become disproportionately high.

On the 7th of March, a Russian research satellite called “Universitetsky-Tatiana” stopped functioning, and some Russian experts believe it may have fallen victim to a US anti-satellite weapon. 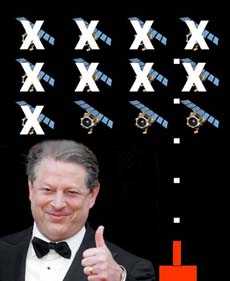 According to reports, the satellite stopped working at about the same time the United States were conducting a military experiment. However, the Pentagon dismissed claims that the Russian satellite was intentionally crippled, although the craft itself was not damaged.

The “Universitetsky-Tatiana” was launched in January 2005 and was designed to research space radiation, in particular UV light intensity. It was also part of ongoing research into EECR (Extreme Energy Cosmic Rays).

Many other satellites have also failed to achieve orbits, and some of those that did suddenly stopped working.

Scientists have said that the latest disaster may force them to collaborate with the Japanese, who successfully launched a carbon-monitoring satellite, GOSAT, last month. However, with all these “accidents,” you have to wonder how long their satellite will remain in action.

With all the concern over Global Warming, it may come as a surprise that the US government (under Bush) wanted to cut back on “Climatic” satellites, to reduce costs. Yet shortly afterwards gave away billions/trillions of dollars in “bailouts.” Obviously the survival of a few reckless banks has a much higher priority than the survival of the planet.

Whilst the cost of these satellites are not cheap, they are also not that expensive compared to other less important projects. It therefore makes you wonder whether there is some other reason for the cutbacks (and accidents). Is there something happening that the governments don’t want us to see? Would it expose the theory of manmade Global Warming (and put an end to another money making scheme), or is something more serious taking place that they want to keep from us for as long as possible? If something should happen to GOSAT in the near future, we may have our answer!