While watching Oprah’s expose on puppy mills earlier this month-a show that she dedicated to her beloved dog Sophie-I thought about all the darling dogs who’ve shared and enhanced my own life. Muffin, a treasured terrier mix my family adopted from a Baltimore pound. Jake, a gentle Brittany spaniel found wandering the streets of New Jersey-with a BB lodged in his leg-and put up for adoption by a breed rescue group. And Carly, my little diva, saved from a laboratory in Ohio by a kind-hearted soul. These dogs didn’t come with “papers”; they came with unconditional love, loyalty and a genuine zest for life. With so many sweet, lovable dogs in animal shelters, on the streets and in abusive situations, it’s hard to comprehend why some people still buy animals from pet stores or breeders.

About 99 percent of pet stores in America obtain dogs from puppy mills, according to The Oprah Winfrey Show. The dogs are confined to small crates or wire cages; they’re deprived of exercise, adequate food and water, veterinary care and attention. Many are emaciated and sickly with crusty, oozing eyes, ear infections, swollen teats, gangrenous skin and/or abscessed feet. Many have pneumonia, kennel cough, mange, ringworm and other diseases. Some spin maniacally in their cages, cower in fear or slump in severe depression. Female dogs are typically bred every time they go into heat and killed when they can no longer produce puppies. 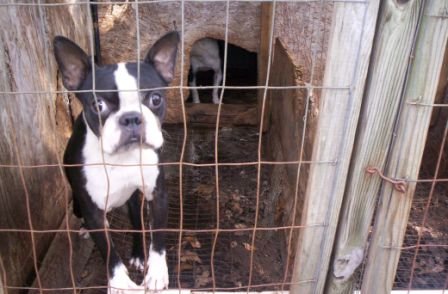 They went into one building, according to Oprah.com, that was full of cramped wooden crates stuffed with dogs. “The spaces are so small,” says Ling, “the mothers are stepping all over their babies.” In another building, dogs were packed inside wire “rabbit cages” stacked to the ceiling; the dogs’ fur became soaked with urine and covered with feces from the dogs above them. Most dogs in puppy mills never leave their cages; they can barely walk. Some even have their vocal cords cut so they won’t bark.

But that’s only half of the problem. Every time a breeder brings another animal into the world, an animal sitting in a shelter loses his or her chance at finding a loving home. Between 6 and 8 million animals enter U.S. shelters each year; half must be euthanized. Many-about 25 percent of dogs who enter shelters-are purebred. With so many animals dying for homes, it should be illegal to breed more dogs.

If you’re thinking of adding a dog to your family, go to an animal shelter, visit Petfinder.com or contact a reputable breed rescue group. As Oprah says, “You can find any kind of dog you want, any age you want, at a shelter or rescue.”

And always have your animals sterilized. Spaying or neutering one dog prevents hundreds of thousands of unwanted births. One viewer was so motivated by Oprah’s expose that she sponsored 100 spay surgeries at SNIP, PETA’s low-cost spay/neuter clinic. Imagine how many lives would be saved and how much suffering prevented if we all had just one animal spayed or neutered and never patronized puppy-selling pet shops. If your dog (or cat) isn’t already sterilized, why not start with him or her?