Last year while racing at California’s Bay Meadows track, 4-year-old gelding Imperial Eyes took a wrong step and broke down in the deep stretch. Russell Baze, the jockey in thoroughbred racing history with the most wins, whipped the stricken horse to a second-place finish. Imperial Eyes had suffered a broken leg and was euthanized. Baze was assessed a small fine and suspended from racing for two weeks.

Even people who only watch an occasional horse race like the recent Kentucky Derby, where second-place winner Eight Belles also suffered a horrific breakdown, see that whips are used frequently and with great force. But not only is whipping horses to get another inch per stride cruel-it can also cost horses their lives. 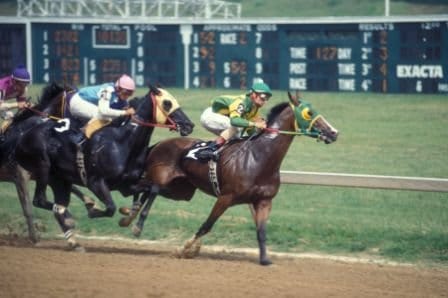 In the U.S., excessive whipping is rarely even penalized.

Monty Roberts, known as the “horse whisperer” and bestselling author of the book The Man Who Listens to Horses, said of racing: “A whip has no place in horsemanship at all. It’s medieval for horses.” Renowned Kentucky horse veterinarian Dr. Alex Harthill said simply: “Sure, it hurts a horse.”

Whipping is an egregiously cruel practice in an industry fraught with cruelty. Thoroughbreds are accidents waiting to happen. While some tracks have switched to synthetic surfaces, which are easier on horses’ legs, they’re still forced to run while young and still growing. Injuries are often masked with drugs. Every year, countless horses don’t make it off the track alive. The death of Derby winner Barbaro made headlines, but numerous horses suffer similar fates. Racer George Washington was euthanized after breaking his leg while running the Preakness last year. Saint Liam, the 2005 “Horse of the Year,” was euthanized after injuring his hind leg. Most of these horses’ broken legs and battered bodies never make the news-and they do not get expensive treatment and long-term therapy. Horse Illustrated magazine reported that 90 percent of all horses end up slaughtered-not euthanized, but killed and turned into food overseas.

While the controversial issues surrounding horse racing should prompt us to eliminate it altogether, at the very least whipping should be banned. It’s not going to solve all of the problems with racing, but it’s a start, and it may prevent more horses from ending up draped in a shroud instead of a wreath of roses.