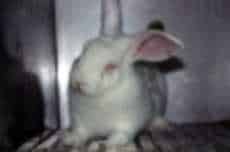 Touche, SaRo. Now, if I can direct your attention to some people who would make your dog look like Mother Teresa. That would be the folks whom animal rights investigators recently documented killing rabbits on fur farms in China and France.

Rabbits on these farms spend their entire lives in small, filth-encrusted cages. The ammonia from urine-soaked floors burns their eyes and lungs and many rabbits die from respiratory diseases-all considered just a cost of doing business. One Chinese farm keeps 20,000 caged rabbits and kills as many as 2,000 of them every day.

When the rabbits are still babies-4 or 5 months old-they are killed. Workers stuff the terrified animals into flimsy wire crates, which they bump and drag across the floor. Some rabbits suffer broken bones and have limbs scraped raw when their legs slip through the wire.

The rabbits are yanked out of the crates by their ears, shackled and hung upside-down by their hind legs, shocked with electric stun guns and decapitated. In video footage shot at one farm, some of the rabbits scream-yes, scream-during slaughter. One investigator saw a rabbit lose control of her bowels after being shocked repeatedly.

One of the rabbits in the video looks very much like my mom’s rabbit Lewie (named after Lewis Carroll because he looks like he sprang straight from the pages of Alice in Wonderland). Lewie is huge-bigger than many cats-but he’s a gentle giant. He loves nothing more than a good scratch behind the ears, which invariably inspires him to leap and twirl in a silly dance before going on a victory lap around the room.

Unfortunately, my mother’s other rabbit, Eddie, who is barely half Lewie’s size, was originally not eager to share his domain with the big lug. When they first met, they latched onto each other’s rear ends in a ying-yang-style fight that was remarkable not for the amount of fur that flew in the 10 seconds before we broke them up but for the silence. They made no sound whatsoever as they busily yanked tufts of fur out of each other’s rumps.

Rabbits are prey animals-it’s in their nature to hide their pain and to stay quiet in order to avoid attracting the attention of predators. So you can imagine how utterly terrified a rabbit must be before he or she resorts to screaming. The thought of someone inflicting that kind of torture on Lewie or Eddie-who can so easily be made blissfully happy by a simple ear-scratch or a few bites of banana-makes me tempted to reach for a bag of flour myself.

I feel bad for Lindsay-sort of. It must have been very embarrassing to be doused with flour in front of the ever-present paparazzi. But while embarrassment is uncomfortable, it isn’t fatal-unlike having your skin ripped off. Lindsay will live to nightclub-hop another day. Bunnies could hop another day, too, if consumers would simply refuse to drape real fur over their backs.