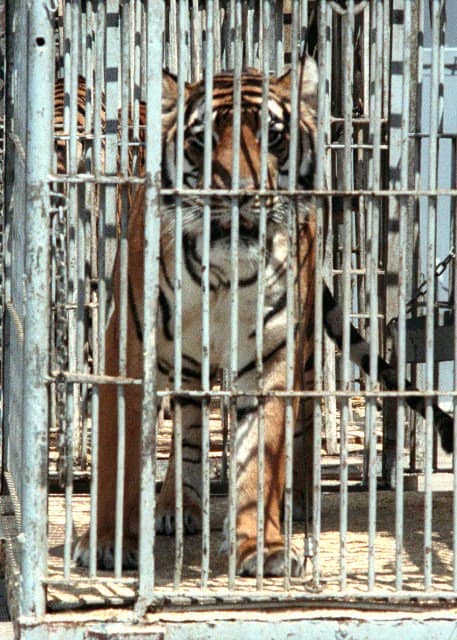 Homecoming, Hail Marys and bowl games: The energy and exuberance of college football exemplifies school spirit. But how do tigers, lions and bears fit into the playbook?

Louisiana State University (LSU) recently found itself embroiled in controversy when it replaced its deceased tiger mascot, Mike V, with a new tiger. But any school that condones the use of big cats, bears and other animals as props should be given a failing grade.

Anyone who has attended a college football game can attest to the sheer intensity of these events. The energy is palpable, and it’s what makes going to college games such an enjoyable experience. But the bright lights, thousands of screaming fans and loud noises such as air horns, marching bands and fireworks are terrifying for animals who can’t possibly understand what’s going on.

While LSU now has its sixth “Mike,” Baylor University uses bears and lions languish at the University of North Alabama, these schools are in the minority, clinging to a “tradition” that most people now find objectionable. Most professional and college sports teams use only costumed humans as mascots-not frightened animals – and for good reason.

On and off the field, animal mascots have a history of taking hard hits. In 1953, members of the fraternity charged with caring for the University of Houston’s cougar mascot, Shasta I, slammed her front paw in a car door, cutting off one of her toes. At LSU, before deciding it was “undignified,” cheerleaders would sit atop Mike’s cage before games and pound on it in an effort to make him roar.

At Texas Tech, three horse mascots were killed in a 10-year period, including High Red, who ran head-on into a fence in 1998 after being spooked, and Double T, who slammed into a wall during a football game in 1994. In 2001, the school’s horse mascot Black Phantom Raider had to be euthanized after he was seriously injured in a traffic accident that demolished his transport trailer.

Even when they’re not being paraded in front of large crowds, constantly being on display on busy college campuses is undeniably stressful for animals, especially for species who normally shun human contact. In their natural environments, big cats roam many miles of territory, seek out mates and raise their young. Bears climb trees, investigate caves and fish in streams. The most elaborate and expensive enclosures still can’t come close to wild animals’ real homes or allow them to engage in the natural activities that are vital to their health and well-being.

Many schools have done their homework and have made the decision not to use live animals. Students and administrators at Pennsylvania State University decided to promote their sports programs by “adopting” (in the form of monetary support) a fortunate lion living at a sanctuary. Texas Southern University opted not to have a live tiger at its homecoming events after weighing the dangers, cruelty and controversy associated with doing so. In 2004, when the University of New Mexico was considering getting a wolf mascot, school officials did an about-face after being besieged by people voicing their objections to the plan.

It’s time for other colleges and universities to do the same. Surely, the highest echelons of education can find ways to entertain and stimulate crowds without compromising the well-being of animals. After all, nothing says, “Go, team!” less than a frightened and unhappy animal on the playing field.

Jennifer O’Connor is a writer for People for the Ethical Treatment of Animals (PETA); 501 Front St., Norfolk, VA 23510; www.PETA.org.