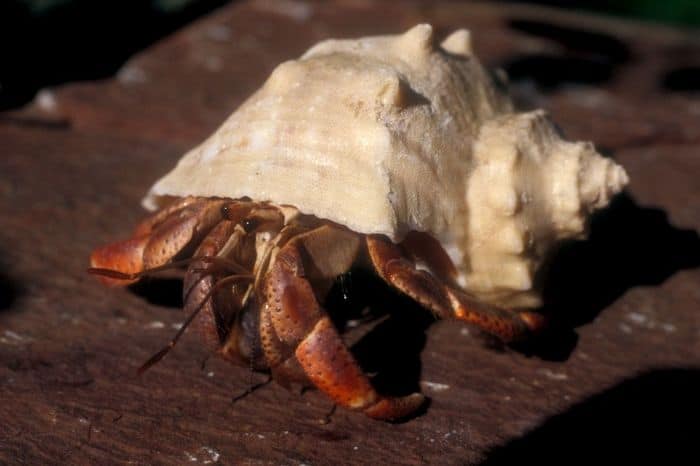 As a woman who loves animals-and a mother who loves her kids, I frequently have to steer my son and daughter away from pet stores, especially the hermit crab section. With the lure of sparkly painted rainbow shells-not to mention the SpongeBob shells with crazy glued-on wiggly eyes (oh, Mommy, please, just one)-kids practically salivate over these animals. If you’ve taken your kids to the beach this summer, you know what I’m talking about.

But I know something that my kids don’t: Hermit crab peddlers are the enemy. Whether they are pet store clerks or kiosk salespeople trying to make a quick buck off tourists, they are not doing the crabs, the kids or the parents any favors.

Hermit crabs may be fascinating animals, but they make lousy pets.

All those crabs you see in pet stores and souvenir shops were kidnapped from their natural homes. They’re bundled up, shipped across the country, and then displayed in cramped cages, forced to fight over a pathetic smattering of shells, most of which are brightly painted, uncomfortable and toxic. If not enough shells are provided, only the dominant crabs will survive. The others are left to curl up in the corner, “naked,” to die.

Many of these crabs, who are already 10 or even 20 years old, are so stressed out by the ordeal that they drop their limbs. One by one. And there’s nothing you can do to save them. Parents: This usually happens after you get the crab home, just in time for your kids to watch.

If your kids don’t cry from the shock of seeing their pets slowly dismembered, you’ll cry when you realize how much money it costs to keep these sensitive animals alive.

Hermit crabs need a moist, warm environment. The cheap wire cages that pet stores sell are literally death traps-crabs cannot breathe dry air and will suffocate in them. Instead, they require large glass aquariums, expensive under-tank heaters, daily misting, weekly bathing and temperature and humidity gauges. They need special lights, a variety of shells that are appropriate for their size and future growth, calcium sand, hideaways, protein supplements, sponges (to prevent them from drowning, which the small ones do easily), access to salt water and regular water (bottled, not from the tap) and toys, including special wood for them to chew.

Crabs also molt-frequently-as I found out when one of the kids in my neighborhood brought his “dying” crab to the “animal lady” (me). “Pinchy” had collapsed half in and half out of his shell and appeared to be dead. He wasn’t: He was in the middle of a difficult molt. At least the kid didn’t throw his crab away, as some do when this happens. First rule of pet ownership: You need to be able to tell if your pet is alive or not.

Molting is a stressful time that requires peace and quiet for crabs and a separate isolation tank to protect them from other, stronger crabs. Be prepared to hand over your wallet, because isolation tanks also require the many heaters, gauges and other accoutrements listed above. Don’t be tempted to buy just a single crab to save money: Crabs are miserable when they’re alone, preferring to travel in packs that number up to 100 in the wild.

Oh, and did I mention that hermit crabs pinch? Not only do they pinch, they also don’t let go, bearing down on the same wound over and over again.

Salespeople will not tell you this. They make money not from the sale of the crabs but from the accessories that go along with them. As a fellow parent, consider this a helpful warning: Stay away from hermit crabs. Your kids may not thank you, but the crabs will.