Every time PETA has sent an undercover investigator into a factory farm or slaughterhouse, we’ve found egregious animal abuse. Our latest case is no exception. Raising and killing animals for food is an ugly business even under the best of circumstances, but only a sadist could swallow what PETA’s investigators saw at a Greene County, Iowa, farm that produces piglets destined for Hormel and other pork companies. 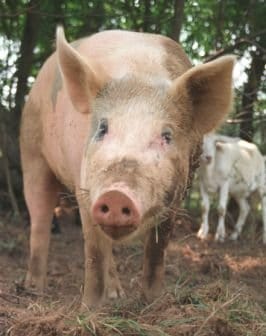 Supervisors and workers were caught beating pigs with metal bars, kicking them repeatedly, shocking them in the face and spraying paint into their nostrils and all over their faces. They slammed the heads of piglets who were deemed too small to be profitable onto the concrete. This common industry practice, known as “thumping,” is supposed to kill the animals instantly, but many of the piglets at this farm survived the blows and some were still writhing in pain more than 12 minutes later.

Employees took pleasure in the animals’ pain. One worker said that the pigs deserved to be hurt and that the more the pigs suffered, the better he liked it. He encouraged PETA’s undercover investigator to pretend that a pig had scared away a “willing” 17- or 18-year-old girl and to punish the pig for it. Another worker said he “get[s] a lot of aggression out” on the pigs and laughed as he suggested they be shot in the vagina with a captive-bolt gun.

Managers behaved no better. One supervisor rammed a cane into a pig’s vagina and boasted about shoving metal gate rods up pigs’ anuses. The same supervisor-who instructed PETA’s investigator to “beat on the b***h” and to “[m]ake her cry”-repeatedly kicked a downed sow. She gave birth the next day and was thought to be in labor during the abuse.

Lacerations were found on dozens of sows at the farm; one pig’s injuries lasted for nearly two weeks. Farm Sanctuary, an animal protection group that is caring for pigs who were rescued during flooding in southeastern Iowa, found wounds on the animals consistent with those documented by PETA’s investigators, indicating that such abuse is systemic in factory farms.

PETA’s exposes of other hog farms have led to felony cruelty charges and the termination of employees for animal abuse. But even when factory-farmed animals aren’t gratuitously abused, they still suffer greatly. Pregnant pigs are confined to metal gestation crates so small that they can’t turn around or even take a single step in any direction. Their piglets are taken away from them, castrated and mutilated-without the use of painkillers. In slaughterhouses, pigs are hung upside-down, bled and scalded, often while they’re still conscious.

People who eat pork are paying to support these routine, industrywide acts of cruelty, but meat-eaters and vegetarians can still agree that the willful abuses witnessed on the Iowa farm are wrong and must stop. When Dr. Temple Grandin, the world’s foremost expert on farmed animal welfare, reviewed PETA’s undercover footage, she said, “The treatment of sows on this video is atrocious animal cruelty. These people should be prosecuted. This is some of the worst abuse of sows I have ever seen.”

PETA is calling on Hormel to enact and rigorously enforce strict animal welfare guidelines for its facilities and for the facilities it supports. Among other things, employees who abuse animals must be terminated and prosecuted, and cameras must be installed in animal areas and randomly monitored by a third party. It shouldn’t take a PETA investigation to bring cruel behavior to a company’s attention-or to remind consumers that by buying bacon, sausage, ham and hot dogs, they are supporting suffering. The best thing any of us can do to end abuses on factory farms is to stop eating animals.