On November 20 to 30, 2008 Manhattan’s La MaMa E.T.C. will present the American premiere of “Godot” by internationally renowned Korean dancer/choreographer Sin Cha Hong. This solo dance drama is inspired by “Waiting for Godot” and captures the play’s existential meaning without the dialogue or characters of Beckett.

Sin Cha Hong writes on her website that Beckett’s play “has always been a source of spiritual and artistic creativity” and that she is “also, somewhat, waiting for Godot throughout my process of dance and meditation, just like Estragon or Vladimir.” She describes recreating the play in dance drama as “a very meaningful turning point in my life.”

Sin Cha Hong’s last New York production, “Pilgrimage” (La MaMa, 2006), was a dance portraying the religious journey towards enlightenment. So it is natural to imagine her embracing Existentialist themes that are commonly ascribed to “Waiting For Godot.” Like Beckett’s play, her dance is grave, intense and concise. Sin Cha Hong does not literally play Vladimir or Estragon, Pozzo or Lucky, but many elements of the play are strongly present, including its centerpiece, a scrawny tree, which bears fruit to indicate the passage of time. There is a whole collection of shoes, ranging from the Tramps’ tight clodhoppers to some stylish-looking, red high-heels. There is even a rope with which the protagonists might have actually succeeded in hanging themselves.

Sin Cha Hong is alone on stage. She awakens beneath the tree, as if to indicate that she has always been there. There is no dialogue, only slow, affective movement, accompanied by a percussive score that would, in Beckett’s words, “hold the terrible silence at bay.” The shoes are manipulated like puppets, as is a large white coverlet which she tears off her bed and surrounds herself, resembling the placenta of a kitten at birth. There are ingenious, delicately-designed lighting images, as when the tree is projected as a shadow upon Sin Cha Hong’s white gown. Overall, there is a feeling of beautiful solitude (implying, perhaps, that the path to enlightenment is a lonely one?) and of the many changes that happen to you while waiting–a journey from agony to laughter.

The production debuted in July, 2008 at Seoul Arts Center’s Jayu Theater. It was heralded as the first dance interpretation of the work ever done in Korea, and probably the world. Korean reviews portrayed the work as one of deep spirituality. Jung Min Shim wrote in Dance Forum, “Sin Cha Hong superimposes the image of waiting for someone or something onto her own life. Her anticipation, endurance, and spiritual pursuit toward ‘awaiting’ are but a part of living. Unfettered by any rigid frame of artifice, Hong…seems to be savoring life from the zenith of that life. From this, she neither pursues nor attempts to induce a brilliant or clear answer. She only dances, naturally and effortlessly, a dance that even manages to embody a sort of playfulness.” Chae Hyun Kim described the piece as “meditative, and therefore inward pointing, as well as deeply self-reflective.” Suk Yong Chang wrote, “In ‘Godot,’ Hong, with the simplicity and the commonplace that transcend the absurdity of Samuel Beckett, discusses with God the path that leads from everyday agonies toward death.” He wrote that the work presented Hong “as a philosopher and a meditator” and was “a work of success that never loses its taste.” 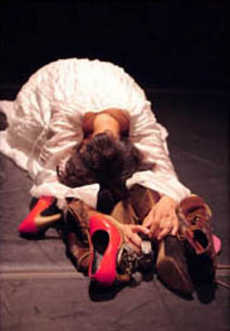 “Godot” is being reworked for its NY debut, after which it will tour internationally. The play’s website is www.sinchahong.com/godot_eng.

Sin Cha Hong is a choreographer as well as a dancer, vocalist and writer. She is one of the most influential artists of Korea in the 20th century. Ou Jian Ping, the dance critic and Director of Foreign Dance Study at National Dance Theater of China, selected her as the flower of western avant-garde, as rooted in the eastern tradition. He cites Sin-cha Hong as one of the world’s 18 most Important dancers, along with Isadora Duncan and Nijinsky. When her ensemble piece “Pilgrimage” was performed in Germany in 1998, Weimar OTZ newspaper called her the Pina Bausch of Korea.

Sin-cha Hong was born and educated in Korea and earned a Masters degree in Dance from Columbia University in 1966. In the early 1970s, she began to create a stir in the dance community with her bold new choreography. She returned to Seoul in 1975, where she shocked and inspired audiences with her audacity. Following this and other initial successes in dance and music, she embarked on a private spiritual journey, studying with religious masters in India and traveling extensively to holy places in Israel, Tibet, South America and East Asia.

She worked in New York for over 20 years and founded her Laughing Stone Dane Theater there. While living in New York from the ’70s to the early ’90s, she worked with John Cage, Yugi Takahashi, Margaret Leng Tan, Nam June Park and many other artists. She presented new dance-theater works nearly every year. Her La MaMa productions during that period included “Laughing Stone Dance Theater” (1980), “Mouth to Tail” (1981), “Isle” (1986), “Matter of Fact” (1987), and “Pluto” (1992, 1994).

She has lived in Korea since 1993, during which time her major works have included “Pilgrimage,” “In to the Time,” “Out of Time,” “The Woman Laughing” and “Voice Performance.” Most of these have also been performed in New York. She re-made her Laughing Stone Dance Theater with Korean dancers in 1994. Performing alone and with this company, she has appeared throughout the United States, Europe and Asia. She founded Ansung Juksan International Arts Festival in 1995; it has been operating continuously on an annual basis ever since. Her performance chronology is available at www.sinchahong.com.

In the U.S., Hong has received numerous prestigious awards, including four NEA Choreography fellowships, grants from NYSCA, NYFA, Hawaii State Foundation on Culture and the Arts, the Asian Culture Council, and a visiting scholar grant from the Fullbright Commission. In Korea, her awards include the Woman of Today prize in 1982, Joon-ang Culture Prize in 1989, Kim Sonkeun Prize in 1996, Wookyung Art Prize in 1997 and Grand Culture Prize in 2003. Her book, “Excuse for the Freedom,” has been a bestseller in Korea and translated into Chinese and Japanese.

In 1989, her troupe gave the first paying public performances in the People’s Republic of China. Two years later, the Beijing dance Academy invited Hong to give China’s first national dance workshop. She has been a Distinguished Visiting Professor at the Central Dance Academy in Beijing and at the Korean National University of Arts.