Continuing audience demand has prompted the KGB Bar, producer of “Attorney for the Damned,” a new rock musical, to extend the piece for an open-ended run at the Kraine Theater in Manhattan’s East Village. The musical is written by Denis Woychuk, composed by Rob McCulloch and directed by Stephen Vincent Brennan.

The piece is a dark, biting, tragicomic peek at the criminally insane and the justice system that abuses them. The musical’s form is reminiscent of The Who’s “Tommy,” in that it is staged entirely as a rock concert. A very dark, funny, horrific story is told in a Rock idiom. The New York Times (Andy Webster) wrote, “It’s profane, astringent, defiant and buoyant, much like its home, the East Village, once was before it was overrun with skyscrapers and pinstriped professionals. Maybe what musical theater, at its best, can still be.”

The piece is also a cry from the conscience of a lawyer who made a living representing the rights of the criminally insane. Playwright/lyricist Denis Woychuk is a former attorney who represented the rights of mental patients for more than ten years in the ’80s and ’90s, working out of Kirby Forensic Psychiatric Center, a maximum security hospital in New York. The musical is actually a dark, symbolic treatment of his 1996 autobiographical book, “Attorney for the Damned” (The Free Press), in which he confessed, “I live with the painful knowledge that I am somehow complicit in the horrible acts some of my clients commit after I ease their legal constraints and help them get released.” 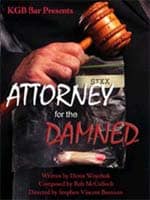 Performances are Wednesdays only at 8:00 pm at the Kraine Theater, located at 85 East Fourth Street between 2nd and 3rd Avenues, Manhattan. Tickets are $20 (students and seniors are $16). Ticketing is available at www.smarttix.com
SMARTTIX and by phone through Smarttix (212) 868-4444.