The Fifth Voice 4 Vision Puppet Festival (www.voice4vision.org) will be presented December 3 to 13, 2009 by Theater for the New City, NYC, to celebrate the work of a unique group of New York artists who have been creating dynamic puppet theater for many years. Theater for the New City is dedicated to presenting cross-disciplinary theatrical works and to developing audiences that support local New York artists; this festival is wonderfully suited to that mission. Puppet theater artists Jane Catherine Shaw and Sarah Provost are co-curators. This festival is generously supported by the Jim Henson Foundation.

Hobo No-no is an original play written for marionette theater that follows the Depression-era tribulations of Chicago hobo “Memphis” Tim, as he attempts to bravely run away from the National Guard, boxcar psychotics, short-tempered rail yard bulls, and his own personal demons. The action unfolds across the landscape of 1930s America, on ten elaborate sets, with eighteen puppets speaking in rhyming pentameter.

Billy Burns is a craftsman working in wood, ink, steel cable and theater. He has constructed sets, props and special effects for Richard Foreman, the Wooster Group, the Builder’s Association, Young Jean Lee, Richard Maxwell, the Improbable Theater Company, the NTUSA, Elevator Repair Service, Jeanette Oi-Suk Yew, Joseph Silovsky, Radiohole, and many others. He also has experience in puppeteering, puppet building, mechanical toy theater construction, stop-motion animation and live performance. Recently, he performed (with marionette) in The National Theater of the United States of America’s Chautuaqua! at P.S.122, and served as Technical Director on Soho Rep’s production of Sarah Kane’s Blasted (Obie winner for set design). “Hobo No-no” is his first attempt at marionette theater. It was presented as a work in progress at St. Ann’s Warehouse, as part of their mini-festival, Labapalooza. 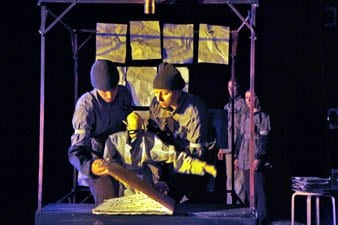 The point of departure for “The Mud Angels” (an emergence of forms) is the catastrophic flood, which occurred in Florence, Italy in 1966. With this historical event as the setting, a dynamic puppet-movement play unfolds which tells the story of a book restorer and the memories which are uncovered as he goes deeper into his work. The piece explores memory and loss in a very tangible way – through the destruction and miraculous restoration of the written treasures of a society. The story uses the central figure of the restorer as one of a dying breed. The project uses puppets (bunraku-style and two dimensional forms), sculptural set inventions, and an original sound score with live performance by Valerie Opielski. Several of the set pieces are multi-functional sculptures that use pulleys, ropes, and levers. The sound score utilizes original music, sound environments, and audio interviews woven into a seamless continuum.

“Next to the Last Poem” is a day in the life of the Portuguese poet Fernando Pessoa who lived from 1888 to 1935. Scholars say he invented numerous “heteronyms” (his word) who interacted with him and each other throughout Pessoa’s otherwise reclusive and lonely life. On a rainy night in March 1914, Pessoa wrote upwards of 36 poems in four distinct voices. This puppet theater show represents an imaginary day before that prolific night. Brassai’s famous photographic subject from the 1930s in Paris, La Mome Bijou, comes to life in the form of a puppet and object theater play. “La Mome Bijoux” has a predilection for things that sparkle. She holds certain illusions about her notoriety and importance. Times are lean. It’s just another night of fortune telling and reminiscing at her usual table. However, these moments are leading up to a future of recognition and immortality she could never have predicted.

A provocative, challenging, and savvy collection of puppet shorts created by the next generation of small-scale artists, featuring selections from Heather Henson’s Handmade Puppet Dreams Vol. IV. This is a collection of films featuring live puppetry on film. Not to be confused with claymation or stop motion animation, these works are conceived as filmed sequences of live action puppetry, and features some of the most beautiful, touching and humorous works for film.

The festival is the premiere presenter of Volume IV of this collection, which has been assembled by IBEX, Inc., an entertainment company dedicated to promoting the fine art of puppetry in all of its various mediums, nuturing work for a myriad of venues including stage, film, and gallery. Company projects include: The Orlando Puppet Festival, environmental theatre spectacles, puppet film series, and gallery exhibits. Its film series, “Handmade Puppet Dreams,” is a collection of puppet film shorts by independent artists exploring their handmade craft specifically for the camera. The series has been screened nationally and internationally and has won several awards.

A puppetry slam of 3-5 minute “short works of genius” by a variety of puppet artists. The Puppet Art Attacks Slam is a fast paced evening of short works-from 3 to 8 minutes long and featuring some of the most innovative emerging artist in the field of puppetry. This is the closing event of the Festival and is always brimming with the city’s most energetic and challenging artists who are doing it for love of the art. Some of the artists who have indicated they will present are: Alissa Hunnicutt, Serra Hirsch, Spica Wobbe, Caitlin Lainoff, Howie Liefer, Caroline Reck, Sally Fisher, Hillary Spector – and others are sure to join in.

“Folktales of Asia and Africa” by Jane Catherine Shaw

Jane Catherine Shaw, while making bread, discovers that she has guests, so while waiting for the dough to rise, she tells three stories using the kitchen tools as found object puppetry. In a Burmese tale called “The Old Man and The Moon,” a flour sifter becomes an old man, a cookie cutter becomes his pet rabbit and a donut maker is the moon goddess. This story explains why the Burmese see the shapes of an old man and a rabbit in the shadows on the moon. “The Lantern and The Fan” is a Japanese folktale that tells of how the traditional lantern and fans came to be a part of Japanese culture. Egg beaters dressed in cloth napkins become two Japanese sisters dressed in kimonos and four steak knives play the “sharp” wise men. The third story is an African tale, a very old version of Mufaro’s “Beautiful Daughters” from Zimbabwe. Like the Cinderella tale, it has many variants, but in this one, wood salt and pepper shakers are the two sisters, a large barbeque basting brush is their father and there are many other characters, all found objects from a kitchen.

The festival is presented by Theater for the New City, Crystal Field, Artistic Director. All shows will be held at Theater for the New City, located at 155 First Avenue, between Ninth and Tenth Streets, in Manhattan. Tickets to all shows are $15, unless noted otherwise. Tickets can be purchased through the box office phone at (212) 254 – 1109 or online at www.theaterforthenewcity.net. For more information, please visit the festival website at www.voice4vision.org.