This year was characterized by multi-culturism, retro-revivalism and an unlikely resurrection of ancient punks, who still had one chord left in ’em to strum for your naked ear. Don’t like these best of lists, so let’s get this over with. 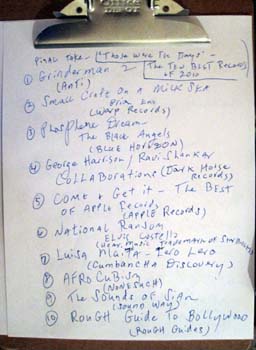 No brainer! Nick Cave and his Grinderman collaborators pulled off a minor miracle, a coup d’ etat or some such nonsense as these words. This is the record of the year for 2010 and Palaces of Montezuma is the song of the year, with lines such as “The hanging gardens of Babylon, Miles Davis the black unicorn, I give to you.” Just one line amongst many other greats. Tune is Velvet-like, a talky/sing like Sweet Jane. Theme of whole record is de-evolution, as technology goes bonkers/gangbusters, mankind goes in an opposite direction, goes Java man, heads for a hills with eyes, goatskins and charnel bones again. Back to the Future when Stanley Kubrick ruled the earth. You get it!

My enthusiasm for this new offering of ambient music by Brian Eno is unbridled. The songs put your head in places galaxies away from your dirty laundry and mundane chores, itching on your checklist of things to do today. Instead, get out your DVD 2001 A Space Odyssey, turn down the volume, and turn up Small Craft On A Milk Sea. Best thing since Music For Films or Music For Airports, the staples of New Wavers in the late 1970s.

I just discovered The Black Angels a few weeks back when sampling tracks at the Waterloo Ipod stations. I was attracted to the blue and orange Op Art cover done by Christian Bland and the sounds punched a hole in my circuit board that foretells a gadget graveyard for a destination. Still exploring-pop sensibility married to divinations of drenching reverb against Vox organs rattling. Great harmonies. Concoction of Psychedelia and Garage Rock carefully controlled makes it accessible. Flower Power is back, reincarnated in a new generation from Austin! That’s where I live too. 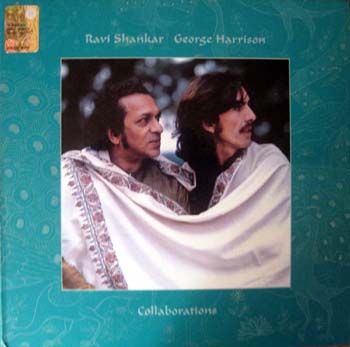 5. COME AND GET IT-THE BEST OF APPLE RECORDS (Apple Records) 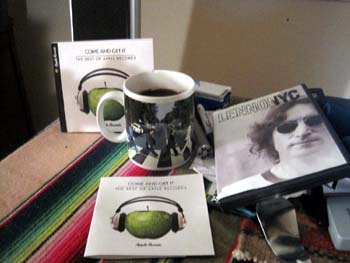 The illustration of that bad wolf as a carpetbagger sneaking off with all the money (done by Tony Millionaire) is what caused me to buy this record. And then I found out it was produced by T Bone Burnett, and that only improved my outlook all the more. 16 fascinating songs; Elvis Costello’s songwriting has only improved through the years. No one can measure up to the way he handles a lyric line, wordsmith of the highest order. As best I can tell, these songs were written with the Great Depression in mind, where our times seem to mirror the Thirties. It’s like a play or a movie, where we jump around to different times or places. Still trying to put this puzzle together?

I found this Luisa Maita CD at Tesoros Trading Company on Congress; you can find trinkets, novelties or marvels from all over the world here, but their specialty seems to be Latin and Indian. Love it, and have been shopping there for years. Luisa is from Brazil, specifically from Sao Paulo. Great singer, with a variety of exotic sounds that recall Antonio Carlos Jobim or even Billy Holiday. Quite luscious, I feel as if I’m slinking in a tropical rain forest while listening and pristine brookwater is dripping over my head. Scratch that, you get the picture!

Do yourself a favor and pick up this platter, treasures await you inside. Bombay, markets teeming with the bounties of India and the way out movie industry there, that’s all the fashion in the West now. Has a DVD that siffs through some of this history, then the CD has an ample sample of great artists like Lata Mangeshar, who’s made more recordings than any artist in the history of recording. This puts lip-synching up on a pedestal and assures it a place amongst our greatest forms of art-the ballot, the sonnet, or a concerto by Amadeus himself. This Rough Guide platter is your Bollywood 101;now if I could only get my hands on some of these Indian films, I’ll watch all day long until this blizzard passes over.

Okay, so John Lennon has been dead now for 30 years. Get over it. But I can’t. Need to retrace his steps from London to NYC. Got Lennon NYC now, the PBS special. The best and only one. For George we have Collaborations and all his work with Apple Records. But the old punks made a come-back too in 2010. Nick Cave, Brian Eno and Elvis Costello all were on top of their game this past year. I hope you will give my list careful consideration. I put a lot of work into it, and I think I got it right. You can have my new Susan Boyle, if you want it!. I really think these are the Ten Best Records of 2010.