There had been a number of reports recently that suggested Michael Jackson was experiencing some health problems, but his sudden death will certainly come as a tremendous shock to his family, friends and millions of fans.

Michael was not breathing when paramedics arrived at his home. They performed CPR and took him to UCLA Medical Center. The circumstances of Jackson’s death remain unclear (although there have been suggestions of a heart attack). Law enforcement sources said that Los Angeles Police Department robbery-homicide detectives have opened an investigation into the death, though they stressed there is no evidence of criminal wrongdoing.

Michael Jackson has always given the appearance of being “young” and many of his actions over the years have supported this, it was hard to believe he had celebrated his fiftieth birthday a short time ago.

There can be no denying Jackson’s musical talents, but his personal life had often attracted more attention than his music in recent years. 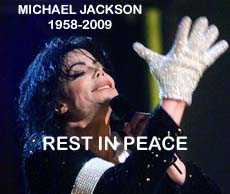 Many saw Jackson’s relationships with children in the past as suspicious, and whilst it is difficult to say for sure what these involved, I like to think these were no more than an attempt to obtain the childhood he lost when he entered the music business. From an early age he was physically and mentally abused by his father, something he revealed in a 1993 interview with Oprah Winfrey.

Michael Jackson’s first professional musical appearance was at the age of 11 as a member of the Jackson 5, but began his solo career in 1971 (aged 13).

Over the years the media have been less than kind to Jackson, highlighting his more eccentric moments, yet failing to promote his more positive side. Considering the life he endured as a child, it is perhaps surprising that he became so successful. However, those early years clearly left scars.

Apart from helping to change the face of music videos, promoting the robot and moonwalk in his dance routines and having many entries in the Guinness World Records, he also donated and raised millions of dollars for beneficial causes through his Dangerous World Tour, charity singles and support of 39 charities.

Sadly, his marriages were less successful. His first marriage to Lisa Marie Presley, the daughter of Elvis Presley, lasted just 2 years, about the same amount of time his second marriage survived with Deborah Jeanne Rowe.

Jackson’s eagerness to settle some lawsuits “out of court” perhaps made him a target to some. Only recently a woman calling herself “Billie Jean Jackson” after one of Jackson’s biggest hits, issued a lawsuit claiming that she was the mother of Prince Michael II.

Despite all that he has given to the pop industry (and the many charities); his court appearances for “alleged” sexual abuse were the most prominent factor in many people’s minds. It would seem that the public were less charitable in this respect and unable to understand that a person, who had been on the receiving end of abuse, was perhaps entitled to be a little “different.” But being different does not automatically make a person bad.

Hopefully, as one fan wrote, he will be remembered for his musical contribution and the joy that brought to so many. He was an exceptionally talented star whose music will live on for a very long time. R.I.P. Michael.