An Italian American tenor brings the world of Italian Music and culture to the mysterious, intriguing art of magic.

Joe Spinella (the Tenor of Illusions) is an Italian American artist who brings the world of Italian musical culture to the mysterious, intriguing, art of magic to create a new, magnificent show, “illusionAria.”

Spinella has two great talents going for him, a well-trained golden Italian tenor voice, often compared to that of Luciano Pavarotti and the unique talent to perform never-before-seen, exciting and revolutionary on-stage illusions. Most of which are all original and have never before been seen in any magic act, anywhere.

A true illusionist, he has managed to combine the two worlds of music and magic to create a true on stage evolution of these two art forms. illusionAria pushes the envelope of all magic shows ever seen on the planet, combining great symphonic music with storytelling magic! The drama on stage comes to life with fantastic characters, colorful costumes, special lighting effects, a state of the art sound system, astonishing illusions, and of course the phenomenal voice of Joe Spinella. The music in illusionAria is from the Emmy Award winning, Macedonia Radio Symphony Orchestra and the sound engineering by multi Grammy and Platinum award winner, Eric Schilling.

And that’s just the beginning … Spinella’s collaboration with Joseph Vulpis, (Lady Gaga’s long time song writer and musical producer), has created several new songs destined to be hits. One of their original singles, Trust In Me, written and produced by Joe Vulpis, is featured in the illusionAria show. This popular new song was considered for a Grammy nomination and is available on iTunes and Amazon.com. In fact, Spinella was considered for a Grammy Award in three categories; Best New Artist, Song of the Year and Producer of the Year for 2013.

“Of course, everyone says that it is an honor just to be considered,” says Spinella. “And considering the challenges of producing a song today, I certainly feel blessed to have been considered. I don’t think any of this would have happened without the insight and support of Joe Vulpis, who also wrote and produced songs for Al Martino, Lady Gaga, Suzanna Klintcharova and so many more artists.”

This grand and glorious new form of seeing and hearing music and magic gives orchestras and opera companies a new and different way to attract a whole new generation of music fans of all ages. 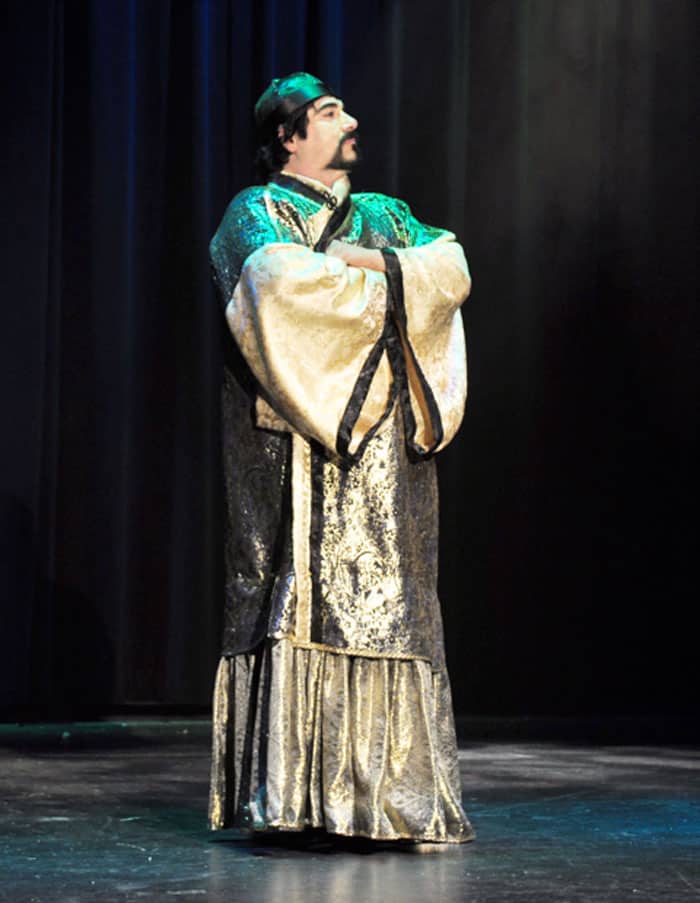 Spinella says he loves the classical music, the wonderful foundation that good vocal technique can provide. He encourages and supports young students to learn all they can about all forms of music. He teaches and coaches younger students now, sharing the wonderful lessons taught to him. He would like to see the U.S. have a national opera house, and wishes that classical music was a part of the curriculum in schools. 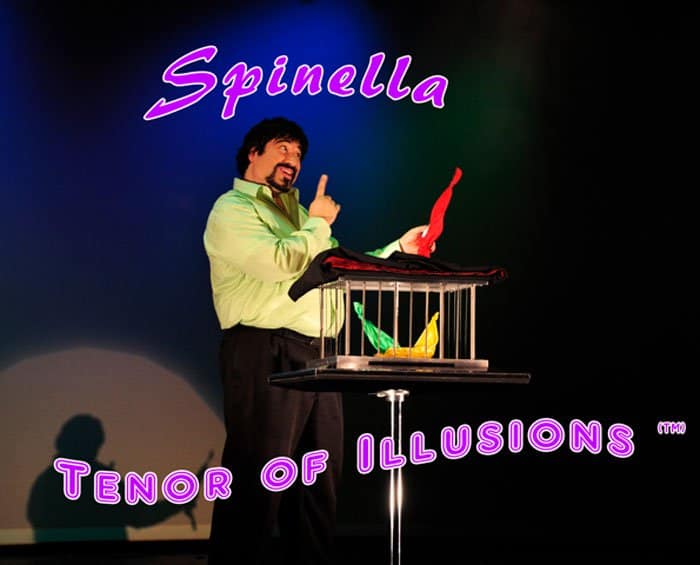 Spinella feels such a disappointment that the arts have very little place in the public school systems today. He hopes to keep the traditions alive and find new, younger, audiences by combining strong vocals, orchestral music and magic in this show. It’s a little difficult to describe his intriguing show, but then so was Cirque du Soleil, at first.

This exciting show premiered with a successful two week run in Venice, Florida with full houses and standing ovations every night. The magic used in the show tells the story along with the wonderful songs. Each song is a vignette in the overall story. The children love the magic, and the adults love that the magic is integral to the plot. It’s a unique concept to be sure, and I don’t know of many opera tenors who perform magic while they are singing. This is only the beginning of the plans this unique performer has in store for the world.

Spinella has recently signed with Bruce Merrin Public Relations/Celebrity Speakers & Entertainment. So much attention has been garnered on radio shows, such as Gary Garver of KCAA Radio in LA and Mother Love on LA Talk Radio, that a press party has been scheduled in Las Vegas in June. Booking agents have already RSVP’d with high interest for this ready-for-Vegas show.

It’s taken a long while for someone with the talent of a great tenor and the skills of a magician to come up with the idea of combining these two creative illusions – music and magic – into one spectacular performance.

Spinella has been working and investing in this unique idea for several years. He started doing magic when he was six years old. Joe perfected his art in the slight of hand tricks and one night included a few of these tricks in his singing act. The reaction from his audience was immediate and overwhelming – they loved it! It was then that he formulated the idea for a show, which combined his two loves – magic and music. The magic and illusions for this show were especially designed by Spinella himself and are all custom made. 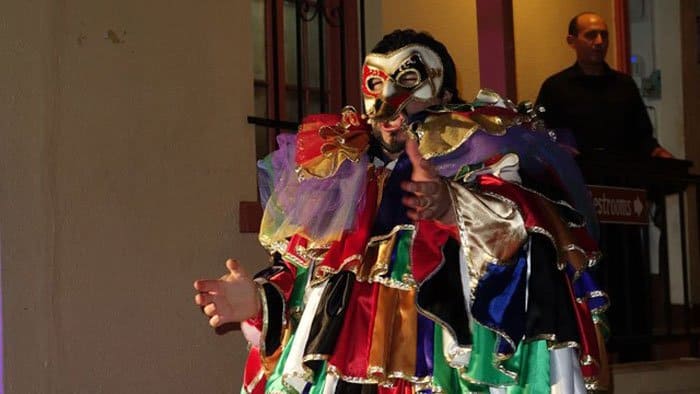 Spinella’s tenor voice is a full-bodied sound of power that sends out a deep feeling of emotions and when combined with this colorful production and the stage effects the results are awe-inspiring.

This is a show that is appropriate for all cultures and all ages, with the tenor’s main goal to expose the beauty of classical music to the younger generation. Spinella takes each song and tells the story behind it.

As life is an illusion and love is often fleeting, so is the illusion that follows the story behind many of the romantic arias and Neapolitan songs. For example, in “Rondine al Nido,” the song talks about the swallow that flies from her nest, never to return. Spinella creates an illusion with an animatronic bird in a cage, which later disappears. So the story behind the song relates to the illusion in his show.

Spinella is a classically trained tenor soloist and performer, offering a diversified repertoire including classical crossover, musical theater, light jazz and romantic songs. He is a graduate of the Manhattan School of Music in New York City, with a major in voice. He has participated in Master Classes with Birgit Nielsen, Eleanor Steber, and Regina Resnik. Spinella has been described as “a solid Metropolitan Opera level performer,” and was also similarly praised by the Princeton Review’s music critic.

Maestro Paul Nadler discovered Joseph and later Joseph was invited to work with Metropolitan Opera coaches in NYC. He began working with Mignon Dunn, retired MET Opera Star, now vocal instructor; and he also began his regular sessions with Joan Dorneman, a vocal coach who worked with legendary Luciano Pavarotti for over 30-years. Perhaps it’s because of Dorneman that Joseph is often compared to Pavarotti. Indeed he’s considered the world’s premiere Pavarotti impersonator, most impressively because he requires no technical dubbing to achieve his vocal range.

Joseph Spinella has made numerous appearances, including most notably with The Three World Tenors, the Israeli Philharmonic under the baton of Zubin Mehta, and the Sarasota Opera. Other guest appearances include the Lake Placid Sinfonietta, the Princeton Symphony Orchestra and the Charlotte Symphony Orchestra.

He sings in six languages and his repertoire includes songs in English, French, German, Hebrew, Italian and Spanish. He has also appeared as a guest soloist with the Anna Maria Island Orchestra, the Sarasota Pops, and the Sarasota Concert Band. He sang for the 1996 local Olympic Torch ceremony and created a CD, “Sparks of Fire,” to commemorate the 2000 Olympics.

He has been the musical director and headliner at Festa Italiana in Lakewood Ranch, Florida since 2010. As a result of being a finalist in the Mario Lanza Vocal Competition in Manahttan last year, Joe was invited to perform for the San Gennaro Italian Festival in Little Italy. 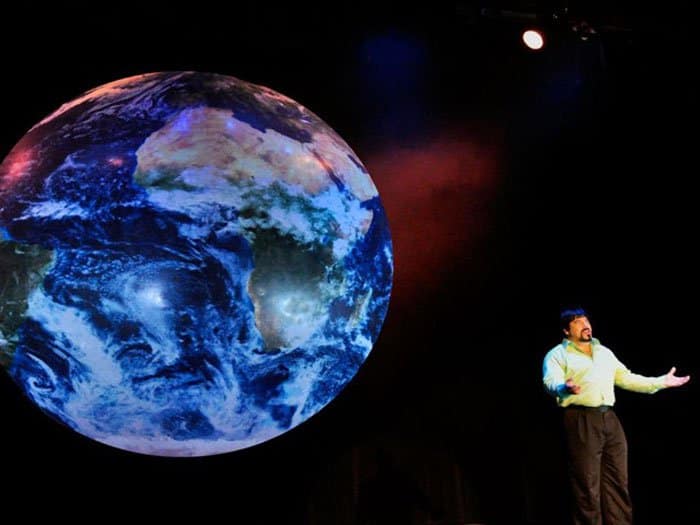 Spinella’s talents and experience reach beyond singing to percussionist, cantor, musical director, choral conducting and theater. Since the age of six, Joseph has been playing drums. It led to becoming a percussionist with the Sarasota Orchestra, the Florida Symphonic Band and a guest soloist with the United States Navy Band. He also performed special engagements with Emmet Kelly, the Flying Wallendas, and Ringling Brothers circus leader, Merle Evans. He has also been special soloist and guest conductor for the Sarasota Mandolin Orchestra.

While this incredibly talented young man concentrates on his musical illusion tours, you can catch up with his recordings and appearances by visiting his website www.JoeSpinella.com or his Facebook page:www.facebook.com/MyTenor. His youtube videos can be found by simply searching on Spinella, Tenor.

Whatever you wish to call Spinella’s new form of performance art, I would not hesitate to say that much of his creative talent and his magnificent tenor voice are derived from the rich musical heritage of his Italian culture, a lineage that continues to produce some of the world’s greatest talent.