The only surprise about Susan Boyle’s recent success on Britain’s Got Talent is the time it has taken the music industry to recognize such a beautiful voice.

We could easily see, from the initial reaction of the audience when she walked onto the stage, that they pre-judged her on looks and age (a common mistake by people nowadays). However, after just a few seconds, no one could deny that what they were hearing was something very special.

It is sad to think that we have been denied the pleasure of her voice for so long, and instead have been forced to listen to others with a fraction of her talent, but perhaps have been more physically attractive. How did the music industry con us into accepting cosmetically pleasing artists, and why did we allow them to get away with it?

Sure, she does not have the looks of Shakira, but her natural and honest style was very refreshing, and attractive in itself. 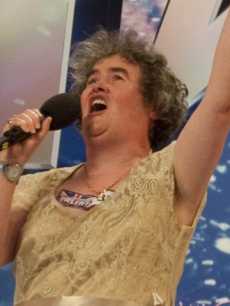 Since appearing as a contestant on the Britain’s Got Talent show, more than 25 million people have had an opportunity to hear her sing (I dreamed a dream) on YouTube, and she has rightly received a great deal of attention from the media.

I would like to join the millions of others in wishing her the success she has waited so long to obtain and hope that she encourages others of her age (and looks) to share their talents with us. Let’s hope that the music industry will learn from this and let us hear singers that have a voice, and not just a body!

Thank you Susan, may all your dreams come true!